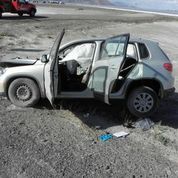 TOOELE COUNTY, Utah – Five people were injured after a two-vehicle crash on I-80 outside of Wendover Sunday.

Two medical helicopters were among the resources that responded to the crash, which occurred around 3 p.m. near mile post 10.

According to a press release from the Utah Department of Public Safety, a couple from California was heading east on I-80 when they decided to head back toward Wendover.

The driver attempted to use the median of the highway to turn around, and when the driver turned, the vehicle was struck by an eastbound SUV.

The 69-year-old female driver of the first vehicle was taken to a hospital by helicopter as a precaution due to the distance to the hospital. Officials said she was flown in fair condition. The woman’s 70-year-old husband was transported to the same hospital via ground ambulance.

A 37-year-old male who was riding in the second SUV was flown by helicopter to a hospital in serious condition.

Two people who were in the second SUV, a 34-year-old male driver and 59-year-old female passenger, were also taken to a hospital by ambulance.

An earlier press release from the Utah Department of Public Safety stated the two victims who were transported by air were in critical condition, but officials corrected the victims’ status as more information became available.

The driver of the first SUV was cited for failure to yield to faster vehicle travel in her lane.