1 suspect in custody, 1 at large after store robbed twice in 24 hours 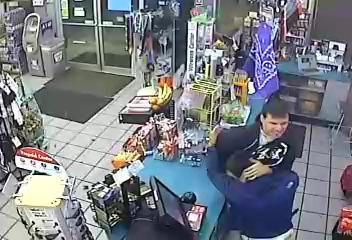 LAYTON, Utah – For the second time in less than 24 hours, a convenience store was the target of a robbery.

A Sinclair convenience store located at 1508 N. Highway 89 in Layton was robbed Tuesday morning just before 5 a.m., and a second robbery occurred at the same store Wednesday morning at about 1 a.m., according to a series of press releases from the Layton City Police Department.

A suspect in the first robbery, Daniel Goodell, was booked into the Davis County Jail based on the first incident. Goodell was a former employee at the store, and investigators said the suspect allegedly told them he had told some of his associates about robbing the convenience store.

Goodell was also identified as the suspect from a photo array. The investigation is still underway.

The second robbery occurred while Goodell was still in custody.

On Wednesday morning, an adult male suspect entered the store, chose a drink and approached the counter. The employee rang up the sale and opened the register, and the suspect demanded cash. The employee refused and began to call police.

The suspect came around the counter to confront the employee, and during the ensuing fight the suspect brandished a knife. The employee backed away and the suspect fled with an undetermined amount of money taken from the register.

The suspect is described as a white male who is approximately 6-feet tall. The suspect’s hat and hood came off during the fight with the employee, and the suspect is pictured above.