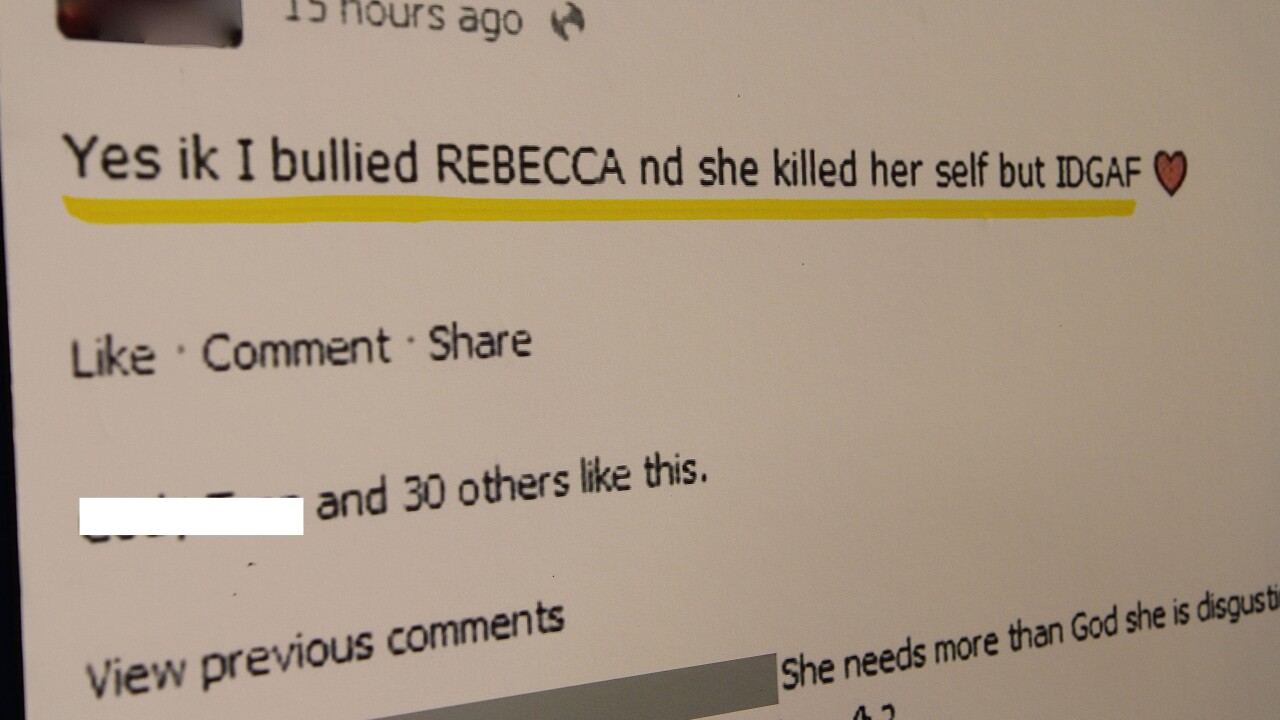 The intense bullying that led 12-year-old Rebecca Sedwick to jump to her death last month stemmed from a dispute between her and a former classmate over a boy they had both dated, police said Tuesday. And it didn’t even end with Rebecca’s September 9 death, said Grady Judd, sheriff of Polk County, Florida.

WINTER HAVEN, Florida (CNN) — The attorney for a 14-year-old Florida girl charged with aggravated stalking that alledgedly led to the suicide of a 12-year-old classmate told CNN that her client isn’t responsible for a controversial Facebook post that led to the suspect’s arrest.

Police on Monday arrested two girls, ages 14 and 12, in connection with the death of Rebecca Sedwick, who jumped from the top of an abandoned concrete plant last month.

Authorities said the 14-year-old girl was Rebecca’s chief tormenter, and the girl posted a taunting message Saturday on the Internet about what had happened.

“Yes IK I bullied REBECCA nd she killed her self but IDGAF,” the Facebook post read. Grady Judd, sheriff of Polk County, Florida, said the online vernacular meant “I don’t give a (expletive).”

The 14-year-old’s lawyer, Andrea DeMichael, told CNN her client “says that this is not as clear cut as it seems.”

The girls, minors who are not being named by CNN, were charged with aggravated stalking.

Rebecca’s mother called the arrests the best birthday present her daughter, who would have turned 13 this weekend, could have received.

“Because justice is finally being served,” Tricia Norman told CNN. “Something’s finally being done about these girls that are bullying her. That’s all she ever wanted was somebody to listen and do something about it.”

It all started with a boy

The intense bullying that authorities say led to Rebecca’s suicide stemmed from a dispute between her and a former classmate over a boy they had both dated, police said Tuesday.

After the Facebook post Saturday, police contacted the suspects and their parents and asked them to come in, according to DeMichael, who advised her client not to do so.

Judd said his office acted after the taunting post.

Judd sent detectives to arrest her and a 12-year-old friend at their homes.

They were booked Monday and the 12-year-old was released to her parents, Judd said.

The 14-year-old made her first court appearance Tuesday and was being kept at a juvenile detention facility.

Friends have a faliing out

According to Judd, the girl was upset that Rebecca had once dated her current boyfriend and began bullying and harassing her more than a year ago when they were both students at a Florida middle school.

In addition to sending harassing messages over the Internet, the girl physically attacked Rebecca at least once, Judd said. She also recruited the girl’s former best friend — the 12-year-old charged Monday — to bully her, Judd said.

DeMichael disputed there was any harassment or fight. She said the 14-year-old and Rebecca did have a falling out over the boy, and there was some “back and forth” at school between the former friends, but the girl never threatened Rebecca.

“She was actually upset at what happened to the victim,” DeMichael said.

Among the online messages that drove Rebecca to jump to her death from the top of an abandoned concrete plant were, “You should die” and “why don’t you go kill yourself?” Judd said.

The night before Rebecca killed herself, authorities say she messaged a boy she had befriended online, writing, “I’m jumping. I can’t take it anymore.”

Judd, clearly upset over the incident, expressed frustration that neither girl’s parents were willing to bring them in for questioning. He said he was astonished to find out that the 14-year-old in the case was still being allowed to post to the Internet after what had happened.

He said he would charge the child’s parents if he could, but said investigators were aware of no “obvious charges” against them.

“I’m aggravated that the parents aren’t doing what they are supposed to be doing,” he said.

Norman said she blamed the parents of the two girls and the staff at the middle school. She and Rebecca reported the bullying to the school, she said.

While bullying was not in itself against the law, Judd said, the girls’ actions allegedly harassing Rebecca in school and online formed the basis for the stalking charge. He did not expect any other charges would be filed.

No court date has yet been set for the girls, who Judd said will likely not see any time in juvenile detention because they have no previous criminal records and the charge is a class-three felony, one step up from a misdemeanor under Florida law.

Had Rebecca been 17 or older, he said, authorities could have filed nothing more than misdemeanor charges.

He implored parents to take more responsibility for the actions of their children online.

“We’ve lost sleep over that child dying needlessly and we want to see things change,” he said. “We want to never, ever, ever investigate a case like that again.”