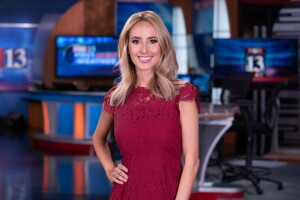 Allison Croghan is the Traffic Anchor, Social Media Anchor, and Midday Meteorologist on Fox 13 News. She has been on Good Day Utah since June of 2012.

After graduating with a journalism degree from Ole Miss, Allison's first full-time television news job was in Joplin, Missouri, where she covered the aftermath of one of the deadliest tornadoes in America’s history.

While Allison certainly has a passion for weather, she loves sports as well. In college, one of her favorite internships was at ESPN in Connecticut. Fun fact: her first time reporting on live television was during an Ole Miss basketball game on ESPNU.

No two days are ever the same and she loves the adrenaline rush of working at the #1 station in Salt Lake City—especially during breaking news or during severe weather.

In addition to her work at Fox 13, she truly loves being involved in the community. Whether it’s hosting charity events or exploring slot canyons with the locals, Utah has been a great place for Allison-- and her adorable dog, Archie-- to call home.