Feeling cramped? How to battle the shrinking airline seat 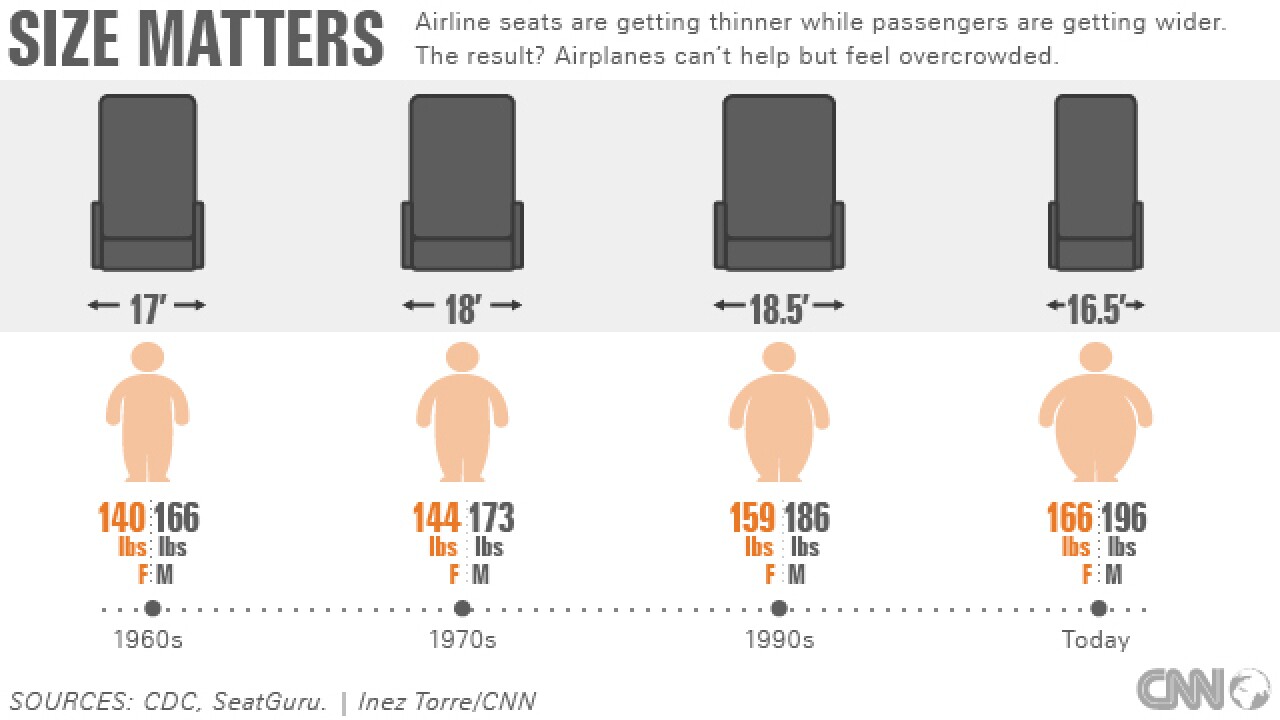 ou’re not imagining it, airline seats are generally getting smaller. But while many airlines have been slimming down their seats over the last few decades, we’ve been bulking up. According to the World Health Organization the global prevalence of obesity has doubled since 1980.

(CNN) — You’re not imagining it, airline seats are generally getting smaller.

But while many airlines have been slimming down their seats over the last few decades, we’ve been bulking up. According to the World Health Organization the global prevalence of obesity has doubled since 1980.

“Seats are getting smaller and smaller as airlines look to squeeze revenue from their economy seats,” notes Ranga Natarajan, the senior product manager at SeatGuru, a website that rates the best and worst seats on nearly every plane in the industry.

Recently, however, airlines been filling planes to a capacity that Natarajan calls “historic proportions”.

“Airlines used to fly at 70% capacity. Now that number is closer to 80 to 85%, which means every middle seat is occupied, so the elbow room just isn’t there,” he says.

To fit in the extra seat, passengers are now facing a width that is 17-inches, and in some cases, as narrow as 16-inches — a state of affairs that has pushed airplane manufacturer Airbus to launch a new marketing campaign, called “it’s the seat”.

In a call to action to make 18-inches the industry standard, Airbus partnered with the London Sleep Center. They tested a small sample of six adults and found passenger sleep quality improved 53% in the larger seats.

“In the early days of jet travel, people were flying less frequently, and over shorter distances. Also, due to a lower load factor, many had empty seats next to them,” she says, adding that all of Airbus’ long haul aircraft have been designed to accommodate 18-inch seats.

Ultimately, though, seat proportions are dictated by the airlines, not the plane manufacturers. Unsurprisingly, Airbus competitor Boeing is unimpressed with their rival’s call to arms.

As for whether Airbus’ campaign will make any difference in years to come, it’s too early to tell, but many aren’t convinced.

“The current trend will continue: airlines will try to make the optimal use of the space available in an aircraft due to the fact that the competition is very strong,” says Dr. Mark Hiller, chief executive officer of Recaro Aircraft Seating, who adds that airlines haven’t changed their orders.

In the past couple of years, Recaro has been charged with the difficult task of making seats that are both more cramped, and more comfortable. To achieve this effect, the company has slimmed down armrests to give more room for passengers’ hips, and repositioned the literature pocket above the tray table to increase leg room.

Mainly, though, Recaro has replaced traditional foam with a netting material that adheres more to the passengers’ body. The result is that seats are thinner, so that even if pitch is reduced, it feels as if there’s more legroom.

What you can do

According to Natarajan, the best way to eke out some more space in the air is to do what the airlines are banking you’ll do: upgrade. Short of that, he notes airlines treat different model numbers differently, and it’s worth looking up the model number and seat width on SeatGuru before you book.