OGDEN, Utah -- A heartbroken Ogden family spoke out Saturday, saying the death of a 32-year-old mother could have been prevented.

Tiffany Snitchler-Phipps was crossing the street in front St. Anne's Center, a homeless shelter, when she was hit by a Jeep Wrangler Thursday night.

Snitchler-Phipps is the third pedestrian killed at the intersection of Wall Avenue and Binford Street over the last year. David Soares was hit and killed trying to cross on Christmas Eve last year. Daniel Thobe was killed a couple of months later. Both men had been staying at St. Anne’s.

In June, the Utah Department of Transportation put up a crosswalk and warning signs at the intersection. A UDOT spokesperson told Fox 13 News they would also mark the intersection with flashing lights, but as of Saturday, no lights had been installed.

Family and friends met at the intersection to mourn Saturday afternoon. Wood was visibly devastated, but also angry.

“I’m angry,” Wood said. “Who’s in charge of this (intersection)? Why is this not done? It’s not done. Where are you? What’s happening? You’re letting people walk to their death.”

The grieving mother said she hoped her daughter’s death wouldn’t be in vain, but would spark a change.

“I think that when there’s a lot of us that get together, we can make a difference,” Wood said. “It shouldn’t take this happening, but I hope they’ll take notice.”

The mourners brought a poster with several pictures of Snitchler-Phipps—smiling and surrounded by family.

“She was so funny,” Wood said. “She just made everyone laugh all the time, and her heart was bigger than the whole world. She had a beautiful smile, and that light’s gone.”

Snitchler-Phipps is survived by two children, a 10-year-old son, and a 14-year-old daughter with cerebral palsy. Friends have set up a memorial account in Snitchler-Phipps’ name at America First Credit Union to pay for the children’s expenses.

You can also learn more about St. Anne’s, its mission, and how to help area homeless by clicking here. 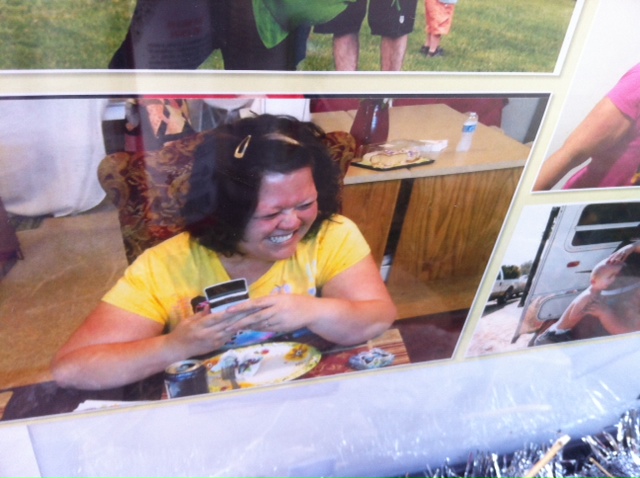