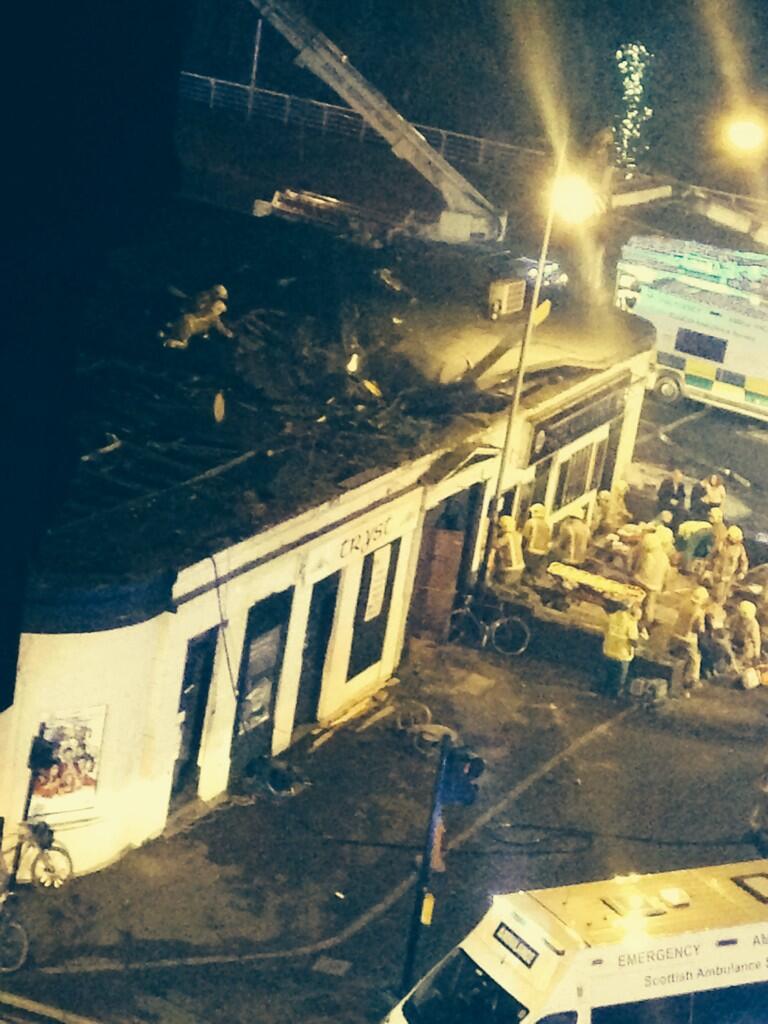 By Chelsea J. Carter, Karen Smith and Per Nyberg

(CNN) — A police helicopter crashed into the roof of a pub crowded with Friday-night revelers in the Scottish city of Glasgow, trapping a number people under the debris, rescuers and witnesses said.

Urban search and rescue specialists were working to make The Clutha Bar safe to access so firefighters can pull victims out, according to the Scottish Fire and Rescue Service.

People remained trapped inside the one-story building, and communication was established between those trapped in the debris and rescuers, said Lewis Ramsay of the Scottish Fire and Rescue Service.

“I can confirm there are a number of casualties but it is too early at this stage to provide further details,” Deputy Chief Constable Rose Fitzpatrick of the Scotland Police said in a written statement.

The helicopter, carrying two police officers and a civilian pilot, crashed on the roof of the pub at 10:25 p.m. local time, Scottish police said.

“Given an incident of this scale we must all prepare ourselves for the likelihood of fatalities,” the head of the Scottish government, Alex Salmond, said in a post on his official Twitter account.

The crash occurred as patrons listened to the self-styled ska band Esperanza, which had taken the stage at the pub a short time earlier.

Jim Murphy, a member of the UK Parliament, said he arrived at the pub just moments after the crash and saw people trying to get out of the building.

“Most of the helicopter appeared to be inside the pub,” said Murphy, who represents a portion of Glasgow.

Murphy estimated he saw at least 10 people who were injured, including some who were struggling with consciousness and others who were bleeding from head wounds.

“Until the emergency services got there, everyone who was at the scene just tried to do their best to help all those who were trapped and injured,” he said.

Grace Maclean and a friend were inside the pub listening to the band when the crash occurred.

“We were watching the band and there was kind of like a (roof) panel fell, there was a whoosh of dust, then we laughed that the band said, ‘We didn’t think we were going to bring the roof down,'” she said. “…The roof didn’t come down. …It didn’t come completely down anyway.”

Maclean said she was sitting at the back of the bar next to an older man, who suffered a cut on his head from the debris when crash occurred.

“Everyone was really confused and scared,” she said. “No one had a clue. There was no explosion. No bang. It was really quiet. There is no fire,” she said.

The noise came after the crash, when people began calling out for friends.

“Everyone was yelling (for) their friends, but everyone seemed to find everyone,” Maclean said.

Christina O’Neill, who saw the crash from her apartment across the street, said she heard what sounded like a low-flying airplane.

“I thought that didn’t sound right for a couple of seconds,” O’Neill said.

After the sound of impact, she saw smoke and people running from the pub.

“I know there were a lot of people lying on the ground kind of getting looked into,” she said.

On the Facebook page of the band Esperanza, a post indicates the band members all made it out of the club. “It seems that the band are all OK. Not so sure about everyone else,” it said.

Hours after the crash, the helicopter — bearing the word “police” on its damaged tail — was still smoldering.

A spokesman for the Scottish Ambulance Service told CNN that there were “multiple ambulances and a special operations team on site.”

Gordon Smart, editor of The Scottish Sun, took to Twitter after apparently witnessing the crash.

“Jesus. Think I just saw a helicopter crash in Glasgow,” he tweeted.

In another post, he said: “This is genuinely horrible. Spare a thought for those involved. Terrifying experience. Thought it was going to land on me.”

The Clutha’s Facebook page contained numerous posts from people concerned about the incident.

“Stay with it everybody, now is the time to think of others,” wrote one person. “People need help.”

“My thoughts are with everyone affected by the helicopter crash in Glasgow — and the emergency services working tonight,” he said.