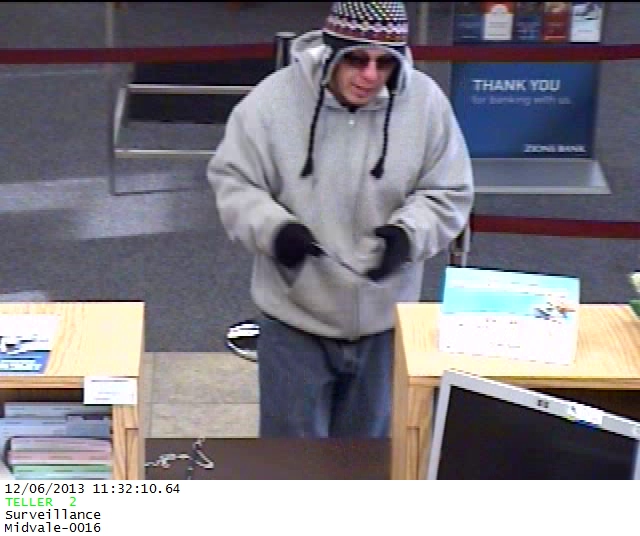 MIDVALE, Utah — Unified Police hope surveillance photos will help lead them to a man who robbed a bank in Midvale Friday morning.

The robbery occurred around 11:30 at the Zions Bank branch at 159 W Center St, according to a press release from the Unified Police Department. The suspect handed a teller a note indicating it was a robbery and demanded money.

The suspect was given an undisclosed amount of money and fled the scene on foot. No weapons were displayed and no one was injured during the robbery, the press release said.

It is unknown if the suspect got into a vehicle after the robbery. Police conducted a thorough search of the area, but did not locate the suspect.

The suspect was described as a Caucasian male in his 20s, 5 feet 9 inches tall, with a medium build and some facial hair. He was wearing a brown knit cap and a gray hooded sweatshirt. He is considered dangerous.

Anyone with information on the suspect or the robbery is asked to call the Unified Police Department at (385) 468-9814.