CENTENNIAL, Colorado (CNN) -- A student who opened fire Friday inside a suburban Denver high school appears to have been seeking revenge against a faculty member because of a "confrontation or disagreement," the Arapahoe County sheriff said.

The shooter, identified as 18-year-old Karl Halverson Pierson, shot one student before turning the gun on himself and taking his own life, Sheriff Grayson Robinson told reporters.

The shooting began after the student walked into Arapahoe High School in Centennial with the intention of confronting a specific faculty member, Robinson said.

"The suspect has been found inside the school and he has deceased as a result of what appears to be a self-inflicted gunshot wound," Robinson said in one of his first statements after the shooting.

Authorities revised downward the number of students wounded in the shooting to one. Two students were previously reported to have suffered gunshot wounds. But Robinson said Friday night that an investigation concluded there was only one after it was discovered that blood on another person was from the sole victim.

One person -- a minor -- was taken to Littleton Adventist Hospital with a gunshot wound, Lauren Brendel, a hospital spokeswoman, told CNN.

Brendel did not release the age, gender and condition of the minor. But Robinson told reporters that the condition of a a 15-year-old girl who was shot was in critical condition after surgery.

Authorities descended on the school after news of the shooting broke -- on the eve of the one-year anniversary of the massacre at Sandy Hook Elementary School in Newtown, Connecticut.

The shooting also occurred roughly 10 miles from where Eric Harris and Dylan Klebold killed 12 students and one teacher in a rampage at Columbine High School in April 1999 before killing themselves.

Pierson walked into Arapahoe High School carrying a shotgun and made no attempt to hide it, Robinson said. He then asked other students the whereabouts of a faculty member, he said.

A school janitor told CNN affiliate KMGH that he saw a student dressed in tactical gear running through the school.

"It just looked weird," the janitor, Fabian Llerenas, said. "He went in and I heard two pops. That's when I knew. I said, 'They are shooting in the school.'"

Llerenas said he called 911, and he then escorted the targeted faculty member out of the school.

"In my opinion, that was the most important tactical decision that could have been made," Robinson said. The faculty member "left that school in an effort to try to encourage the shooter to also leave the school."

Pierson's body was found later in a classroom, Robinson told reporters. The student appears to have acted alone, he said.

In addition to the shotgun, authorities found two Molotov cocktails inside the school, Robinson said.

One of the Molotov cocktails detonated, he said. The other was "rendered safe," Robinson said.

As part of the investigation, authorities also will be looking at school surveillance video, the sheriff said.

Investigators also are searching Pierson's car, his home and another home that he had access to, the sheriff said.

High school senior Frank Woronoff told CNN he had known Pierson since they were freshmen together.

"He was the last person I would expect to shoot up a high school. He was honestly incredibly humble and down to earth. He was a little geeky but in a charming way," he said. "So I don't know anyone who hates him really, so it came as a surprise -- to me at least."

The first sheriff's deputies and police officers arrived at Arapahoe and entered almost immediately after the shooting was reported, Robinson said.

While authorities hunted for the student gunman inside the school, students were locked in their classrooms.

Courtney Leytoldt told KMGH she saw a girl, covered in blood, running down the stairs yelling, "Help me, help me, there's a shooter."

Leytoldt said she was in yoga class and that her teacher told all the students to get into a closet to protect them.

Ninth-grader Whitney Riley was getting ready to grab her computer from her locker when the shooting began.

"We were having fun and laughing and then, all of a sudden, we heard a really loud bang," the 15-year-old told CNN.

"My teacher asked what it was and then we heard two more and we all just got up and screamed and ran into a sprinkler system room."

Inside the windowless room were five students and two teachers. "We were shaking, we were crying, we were freaking out," Riley said. "I had a girl biting my arm."

They soon heard people yelling, and walkie-talkies crackling, and then they heard police asking someone to drop the gun, put the gun down, and hold his arms up, she said.

She did not hear another gunshot, though the people doing the talking could have moved farther away, she said. Soon, they heard police ordering them out.

At that point, his teacher turned off the lights and locked the door.

"We ran to a corner so they couldn't see us," Powers said.

Within about 14 minutes of the initial report, "we had information on the radio that my deputies believed they had the shooter down inside the school," Robinson said.

Dozens of students could be seen walking away from the school, with their hands in the air. Some stood in lines at what appeared the high school track field, where they appeared to be undergoing police pat-downs.

Students were then taken by bus to a nearby church where they were reunited with their families, Robinson said.

The high school, with a student population of 2,229 students, has 70 classrooms. The school, which was built in 1964, is part of the Littleton Public Schools system.

Gov. John Hickenlooper called the shooting an "all-too-familiar sequence, where you have gunshots and parents racing to the school and unspeakable horror in a place of learning."

President Barack Obama was briefed on the shooting, according to a White House official. 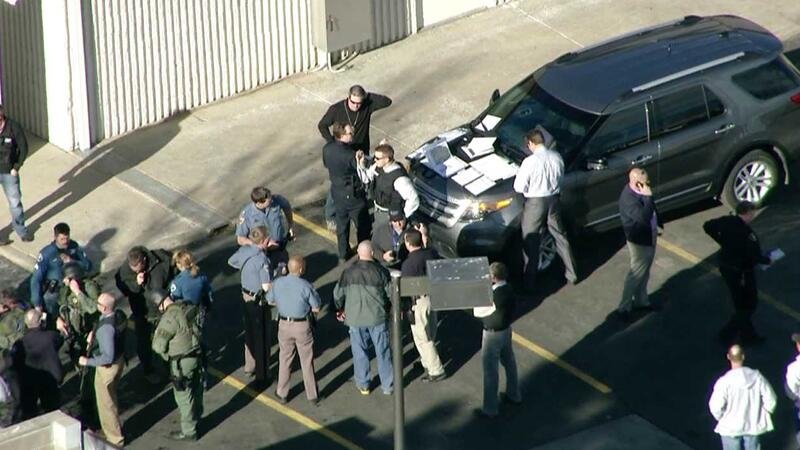