Colorado’s school shooting — over in 80 seconds 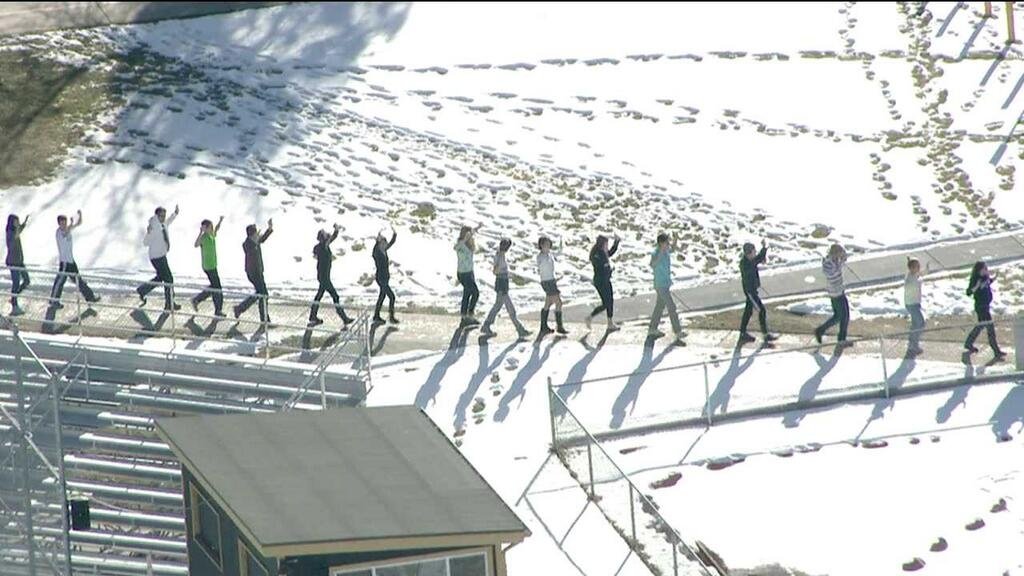 CENTENNIAL, Colorado (CNN) — It started just before 12:33 p.m. on Friday, moments after the high school senior and debate club member parked his car in the student lot at Arapahoe High School in suburban Denver, then — wearing a bandolier containing shotgun shells and carrying a pump-action shotgun, a machete and a backpack holding three Molotov cocktails — walked through a door adjacent to the library.

“He took no effort to conceal the fact that he was armed,” said Arapahoe County Sheriff Grayson Robinson.

In less than 80 seconds, Karl Pierson “fired one random shot down a hallway,” then entered an area where 17-year-old Claire Esther Davis was seated with a friend, “and shot the female victim point-blank” in the head. “There was no time for the victim to run from the shooter,” Robinson told reporters on Saturday.

Pierson then fired another round down a hallway, then entered the library, where he fired again and ignited one of the Molotov cocktails, according to Robinson.

That ignited at least three bookshelves, causing smoke to pour into the library.

He then fired a fifth round and ran to the library’s back corner, “and there took his own life.”

“His intent was evil, and his evil intent was to harm multiple individuals,” Robinson said about Pierson, whose entrance into the school was documented on security cameras, as was the bulk of the one minute, 20 seconds of violence that ensued.

The victim in the school shooting in Centennial “probably was simply in the wrong place at the wrong time,” Robinson said.

He added that, to his knowledge, the shooter and the victim did not know each other.

The shooter’s target, appeared to have been the librarian, who runs the debate team and who had disciplined Pierson early last September, Robinson said.

But the librarian — accompanied by a janitor — had departed the school building as soon as the incident began to unfold, he said.

The janitor told CNN affiliate KMGH on Friday that the student was wearing tactical gear.

“It just looked weird,” Fabian Llerenas said. “He went in and I heard two pops. That’s when I knew. I said, ‘They are shooting in the school.'”

Llerenas said he called security and then escorted the faculty member out of the school.

Pierson had fired at the man but missed, Llerenas told KUSA.

“He was so shooken up, he felt the wind out of the shotgun just blow his hair out, but it didn’t hit him.”

The rampage might have resulted in many more casualties had it not been for the quick response of a deputy sheriff who was working as a school resource officer at the school, Robinson said.

Once he learned of the threat, he ran — accompanied by an unarmed school security officer and two administrators — from the cafeteria to the library, Robinson said. “It’s a fairly long hallway, but the deputy sheriff got there very quickly.”

He praised the deputy’s response as “a critical element to the shooter’s decision” to kill himself, and lauded his response to hearing gunshots. “He went to the thunder,” he said. “He heard the noise of gunshot and, when many would run away from it, he ran toward it to make other people safe.”

The shooter’s weapons had been purchased legally on December 6 at a local outlet, Robinson said.

Robinson also credited the faculty member for having left the school as soon as the threat became apparent. “In my opinion, that was the most important tactical decision that could have been made,” Robinson said on Friday. The faculty member “left that school in an effort to try to encourage the shooter to also leave the school.”

In a statement read by Robinson, Davis’s parents said that first responders and the trauma team at Littleton Adventist Hospital had saved her life, but that she remained in critical condition with severe head trauma. “She needs your continued prayers,” it said.

Pierson’s body remained inside the school until about 5 a.m. Saturday, when the Arapahoe County Coroner’s Office removed it.

His mother was out of town on family business, but both parents have spoken with investigators, said Robinson, who added that the dead man appeared to have acted alone.

Police executed search warrants for Pierson’s car and his mother’s house and his father’s house, though Robinson would not say what may have been found.

While Pierson’s act may be long remembered, his name will not be, if Robinson has his way. He “deserves no notoriety and certainly no celebrity,” he said. “I choose never to use his name again in public.” Still, others recalled the shooter with affection and his actions on Friday an aberration. He was a “nice young man,” a neighbor told CNN affiliate KUSA. He was an achiever, an athlete who ran cross country, and he had worked on an Eagle Scout project.

Frank Woronoff told CNN he had known Pierson since they were freshmen together.

“He was the last person I would expect to shoot up a high school,” the high school senior said. “He was honestly incredibly humble and down to earth. He was a little geeky, but in a charming way.”

After it was clear that Pierson was no longer a threat, police escorted the school’s 2,000 students from the buildings. TV crews who by now had descended on the campus en masse showed dozens of students — their hands in the air — walking out of the school. Some stood in lines at a field, where they were patted down by police.

The students were then taken by bus to a nearby church, where they were reunited with their families, Robinson said.