Police release images of 2 suspects after pair of armed robberies 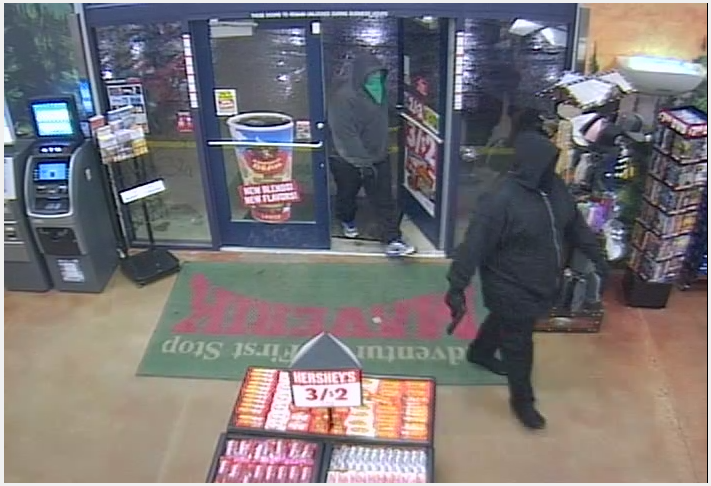 According to a press release from the Weber County Sheriff’s Office, the suspects robbed a Maverik convenience store, located at 4098 West 1975 North, at gunpoint around 1:31 a.m.

The suspects forced the clerk to open the till, and they fled with an undisclosed amount of cash. They were last seen leaving the store on foot.

The suspects are pictured above and described as follows. The first is a white or Hispanic male in his ‘20s who stands about 6-feet tall and has a medium build. He was last seen wearing a black hooded sweater, black pants and a black bandana.

The second suspect is described as a white or Hispanic male in his ‘20s who stands about 6-feet tall and has a larger build. He was last seen wearing a black hoodie, blue jeans, and shoes that were gray, white and blue. He had a green bandana covering his face.

Both suspects were armed with handguns, but no shots were fired and the clerk was not harmed. Anyone with information about the suspects or the crime is encouraged to contact police.

At about 4:43 a.m. Thursday, two masked suspects robbed a McDonald’s located at 1838 West 2700 North in Farr West City. According to a press release from the Weber County Sheriff’s Office, the robbery appears to have been committed by the same suspects who robbed the Maverik.

The suspects threatened an employee with guns and escaped with an undisclosed amount of cash. No shots were fired, an no one was harmed.