SANDY, Utah — The Unified Police Department is asking for the public’s help in identifying a suspect in an aggravated kidnapping and aggravated robbery Friday.

A 26-year-old man told police he arrived at a relative’s house near 3900 E Alta Approach Rd. and found a sliding door open. The man heard some noises inside the home and encountered the suspect.  (scroll to the bottom of this article to see surveillance photos of the suspect)

The suspect then pointed a black semi-automatic handgun at the man, who tried to run away, but the suspect caught him, according to a press release.

The suspect kept the victim in the home for about 45 minutes as he collected various items.

As the suspect was leaving, the press release said, the victim’s 30-year-old sister and 14-year-old niece arrived at the home. The suspect then pointed the gun at them and took items from them before leaving in his own vehicle, which he had parked in the garage.

During the course of their investigation, police discovered a receipt that had been dropped by the suspect. Detectives went to the store listed on the receipt and found surveillance photos (below) of the suspect.

The suspect was described as a white male in his late 20s to early 30s, 5 feet 9 inches tall, 150-160 pounds, possibly brown hair, “weathered” skin and bags under his eyes.

The vehicle police are looking for is a two-door black Honda Accord, possibly a 2002-2004 model, with Utah license plates starting with the letter “A.”

The Accord had a 5 inch by 7 inch sticker with a silver skull in the back window. The skull on the sticker had diamond-shaped eyes.

Anyone with information on the suspect is asked to call the Unified Police Department at (801) 743-7000. 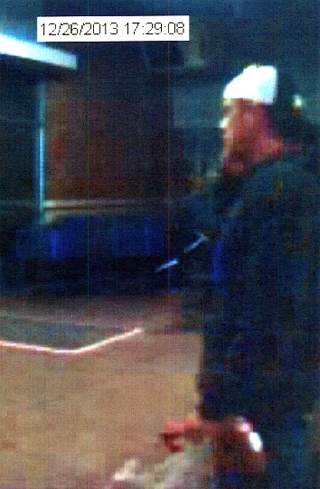