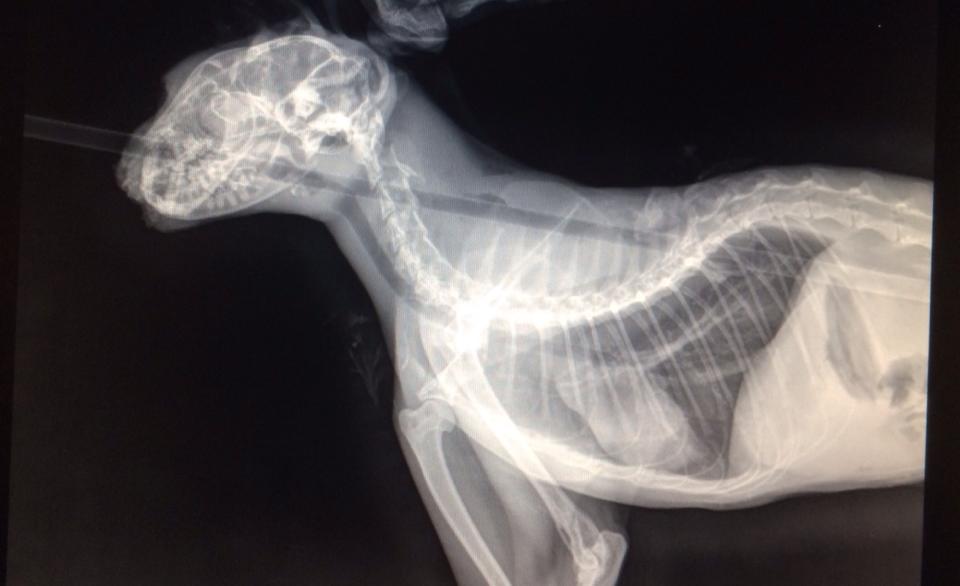 WARNING: Some viewers may find the photos in this gallery disturbing.

WASHINGTON CITY, Utah —  A teenage boy has been identified as a suspect in a case involving a wounded cat, Washington City police said Thursday.

Officials with the Washington Family Veterinary Clinic said “Quiver” the cat came to their facility on Feb. 7 with an arrow piercing her face and exiting near her shoulder. Officers confirmed Thursday that they have identified a teenage boy as a suspect in the case, but have not released the suspect’s name.

Sundays Hunt, who is the Utah director with the Humane Society of the United States, told FOX 13 News Friday evening they were also offering a $5,000 reward in the case for information leading to the arrest and conviction of the person(s) responsible, bringing the total of rewards offered to $9,000.

“We’ve got to get these guys so let’s get whoever knows motivated to turn them in by upping the ante…The HSUS will offer a $5,000 reward for any information leading to the arrest and conviction of these horrible people,” Hunt said in a statement to FOX 13 News.

According to a press release from the Best Friends Animal Society, the cat survived a surgery to remove the arrow, and a medical team reports “Quiver” is improving.

The shaft went into the animal near the nose and exited near a shoulder-blade, and the cat will be at the clinic until she can recover. It was not immediately clear how the cat had come to be injured.

According to the press release from Best Friends, the cat was one of several community cats being cared for by volunteers with One More Chance C.A.T.S. at a park in Washington City. The cat had not been seen in several days leading up to a volunteer finding Quiver impaled with an arrow.

“We were all deeply saddened at seeing what Quiver went through, and shocked to know that someone out there could inflict this kind of cruelty on another living being,” said Janice Dankert, supervisor for Best Friends’ Four Directions Community Cat program in the press release.

“The Humane Society of Utah exists to eliminate the pain, fear and suffering of ALL animals,” said Executive Director Gene Baierschmidt in a press release from the Utah Humane Society. “The Humane Society is gravely concerned about about cases of animal abuse throughout our state. If this $3,000 reward leads to an arrest and conviction, it will hopefully send a message that prevents heinous acts like this from happening again.”

According to the release from Best Friends Animal Society: “Donations for Quiver’s medical care are being taken at the Washington Family Vet Clinic, 969 N. 3050 East. Any donations above and beyond her bills will be put toward an emergency medical fund used to treat other animals in emergency conditions.” Those interested in helping can also contact the clinic at 435-627–1300 during business hours.

Officials with Washington City Animal Shelter are asking anyone with information relating to the incident to contact them at 435-673-7194.