Suspect who engaged police in shootout in Magna identified

MAGNA, Utah – Police got into a shootout with a bank fraud suspect in the middle of a neighborhood here, but amazingly no one was injured.

Salt Lake County Sheriff Jim Winder said it began about 1 p.m. Thursday, when an African-American man in his late-20s attempted to commit a fraud at a Wells Fargo bank. Three Unified Police officers arrived, and the suspect fled into a neighborhood near 8200 W. and 3500 South.

It was there, Winder said, the man pulled out a "high-capacity machine pistol" and fired on the officers.

"Our officers sought cover, returned fire, the suspect went to the ground," Winder told reporters at the scene. "We're not sure why, it may have been because of a misfire because of his weapon."

Macayla Tillman was in her home when she heard the shots.

"I just heard a couple gunshots and came out the back door and then I seen the cops have some guy down on the ground," she told FOX 13. "They had him at gunpoint."

Amazingly, no one was hit by the bullets.

"It appears that rounds have penetrated vehicles and potentially some of the houses," Winder said.

The suspect was taken into custody without any further incident. He was being questioned late Thursday. The officers involved in the shooting were placed on leave, routine for officer-involved shootings. 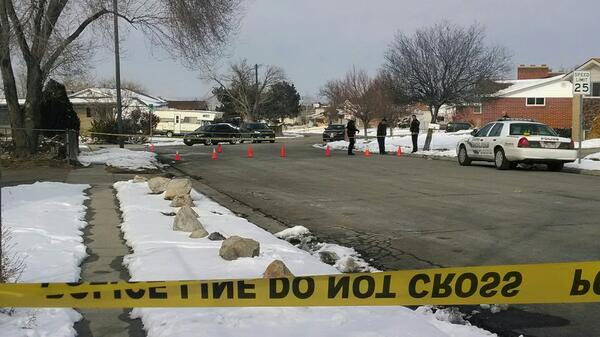