USDA: Recalled beef may have reached 35 states, 173 stores in Utah 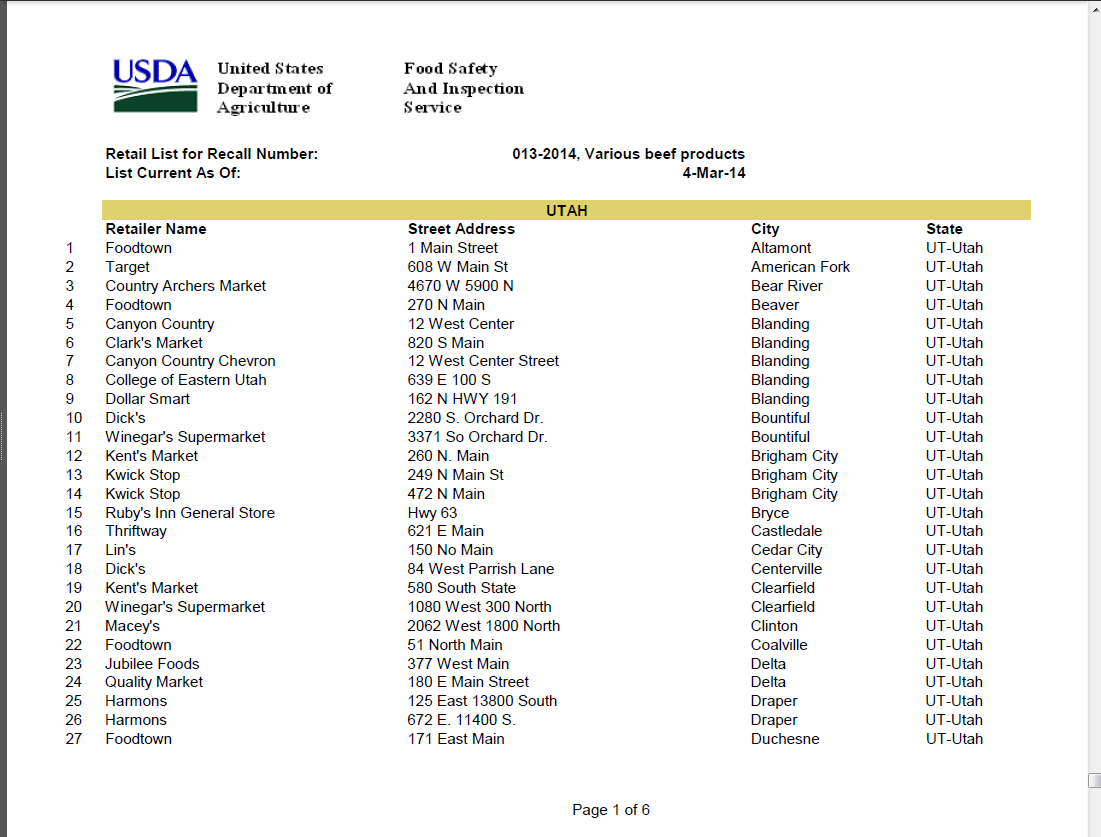 The images above display the names and addresses of Utah stores that may have received shipments of the beef, according to the U.S. Department of Agriculture. Click here for a PDF of the nation-wide list: Beef recall list by state

By Elizabeth Landau and Jason Hanna

(CNN) — Beef recalled earlier this year from a California meat producer may have reached 35 states and Guam, the U.S. Department of Agriculture said.

Thousands of retailers have been added to a list of companies that could have received beef products from the producer, Rancho Feeding Corp., since the February recall, the USDA said.

“The retail list has been growing as more customers have been notified,” USDA spokesman Adam Tarr told CNN Friday. “The list could expand.”

The USDA will continue to update the list so that the affected products can be removed from commerce, he said.

The USDA’s Food Safety and Inspection Service said the meat involved in the February recall came from “diseased and unsound” animals that weren’t properly inspected.

“Thus, the products are adulterated, because they are unsound, unwholesome or otherwise are unfit for human food and must be removed from commerce,” the government agency reported in February.

The USDA had not received any reports of illness because of the recalled Rancho meat as of a statement issued in February. But the agency called it a “Class I recall,” meaning it is a “health hazard situation where there is a reasonable probability that the use of the product will cause serious, adverse health consequences or death.”

After Rancho Feeding Corp. made the recall, Nestle USA issued a voluntary recall in February of some types of Hot Pockets.

Nestle said it had determined that “a small quantity of meat from Rancho was used at Nestle’s Chatsworth, California, production operation,” which is devoted entirely to Hot Pockets sandwiches.