By Tom Watkins and Greg Botelho

(CNN) — Several times a day, helicopters land and take off from the helipad above Seattle’s Fisher Plaza.

But this time was different.

The abnormal sound — what the lead investigator described as an “unusual noise” — gave away Tuesday morning that something was amiss. What followed immediately afterward proved it, as a news helicopter spiraled not skyward but into the ground, bursting into flames with those flames spreading to several parked cars in its path.

“I looked and the helicopter was almost immediately pitched sideways and off balance,” recalled construction worker Bo Bain to CNN affiliate KING. “And he kind of just nose-dove over the trees, and clipped the top of the trees and crashed just on the other side of the street there.”

The two people aboard the helicopter died in the crash, and another person who’d been in one of the three vehicles that caught fire was critically burned, officials said.

The scary incident also rattled a vibrant part of the Emerald City, falling a few feet from the iconic Space Needle and not much further from the Experience Music Project, Children’s Museum and the Bill & Melinda Gates Foundation offices about a quarter-mile away.

What happened, and why? Authorities offered little clarity in the immediate aftermath of the crash, expect to promise to someday get an answer.

Owned and operated by Helicopters Inc. — a company that specializes in providing news-gathering choppers for media — the 2003, Texas-built Eurocopter AS350 was in the midst of a seemingly normal Tuesday morning. While KING indicated on its website that it sometime made use of the helicopter, it was being leased at the time by CNN affiliate KOMO.

The helicopter had just come from Covington, Washington, and was planning to head next to Renton, said Dennis Hogenson with the National Transportation Safety Board, which is leading the investigation. Bain recalled that it spent “a minute or two” on the launching pad outside KOMO’s offices when it tried to set off again.

“A witness described as the helicopter lifted off from the building and began to rotate counterclockwise and subsequently crashed,” said Hogenson.

One of them, Daniel Alejandro Gonzalez, told CNN affiliate KIRO that he had gone outside to smoke a cigarette when he heard the helicopter’s engine turn over. “About 15, 20 seconds later, I heard it, it sounded like in the movies — when it goes into slow motion, when you hear the ding, ding, ding … and after that I heard it collapse. I heard it hit the ground, and that’s when I looked up.”

Within a couple of seconds, the scene was ablaze.

Video showed what was left of the helicopter immersed in flames, as well as a line of fire in the street that engulfed several vehicles.

One man emerged from was once a red car, but was now ablaze, with “his shirt … in flames, his head … bleeding,” Gonzales said.

“He walked about 20 feet and he collapsed.”

The injured man — in his late 30s — was taken to Harborview Medical Center in critical condition, with burns over 50% of his body, said fire department spokesman Kyle Moore.

A hospital spokeswoman, Susan Gregg, said doctors at the level-one trauma center had sedated the man, put him on a ventilator and were administering fluids. They were still trying to determine the extent and severity of the burns, she added.

Gregg said the man may have helped reduce the severity of his injuries by rolling on the grass, extinguishing the flames.

Media mourn loss of their own

Bain described the next few minutes as “chaotic,” with people abandoning their cars and one driver who “made a U-turn and got out of Dodge as quickly as possible.” The area was already abuzz with commuters heading to work but, thankfully, not many tourists as the Space Needle was still a little over two hours from opening.

Still, while it could have been worse, the crash had a devastating effect — especially among those who knew the victims.

Several media members were visibly shaken, with Murray describing KOMO workers “in a state of shock.”

Strothman had earned 14 Emmy Awards during his career and was working as a freelancer after having retired from KOMO. His son still works as a photographer for the station.

“He was a guy who really knew how his pictures could tell a million words,” said an emotional KOMO News Anchor Dan Lewis of Strothman, who also worked for the helicopter leasing company that was operating the aircraft. “… He was such a gentleman, a true gentleman.”

Pfitzner too was a familiar face at the station. “He always had a smile on his face,” said anchor and reporter Molly Shen. “He loved what he did, loved to be able to fly and be up there above the city and see things from a perspective that most of us don’t get to see.”

Seattle’s mayor, Murray, met later Tuesday with Strothman’s family, having known the father and son given their work in the news business.

“It just brought it home in a very personal way,” the mayor told reporters. “… It just reminds us both that we are public servants. And people put themselves at risk in your business.”

‘Just a part of the tail and burnt-out metal’

Arriving firefighters found lines of blazing fuel in the street and thick, black smoke covering the area, with “wreckage strewn across the lawn along with wreckage across the street,” said Moore, the fire department spokesman.

Their and other first responders’ prompt and “pretty outstanding” actions, as Murray described them, helped prevent a horrific situation from becoming worse.

Ten tons of sand were dumped in the area to absorb the helicopter’s fuel, with vacuum trucks later heading to clean up the site, said the mayor.

The Space Needle closed due to the crash, as did the city’s monorail and parts of streets in the area.

The helicopter did not appear to any have struck any nearby buildings before its fiery end.

“What we have left is basically just a part of the tail and burnt-out metal from the main chassis of the helicopter,” Moore said.

Investigators began Tuesday morning to interview witnesses, assess the scene and gather the wreckage in order to literally piece together what happened at an off-site location.

Hogenson, from the NTSB, said that his agency should issue a preliminary report in about five days and a full report — including the probable cause of the crash — in up to a year.

“We mourn their loss and suffering and our thoughts and prayers are with them,” Lieber said. “We will cooperate fully and completely with the National Transportation Safety Board and provide to it whatever information it wants in order to assist it in its work in determining what happened.” 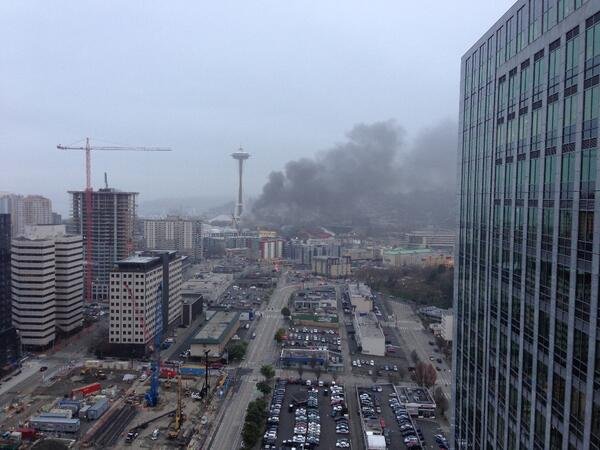