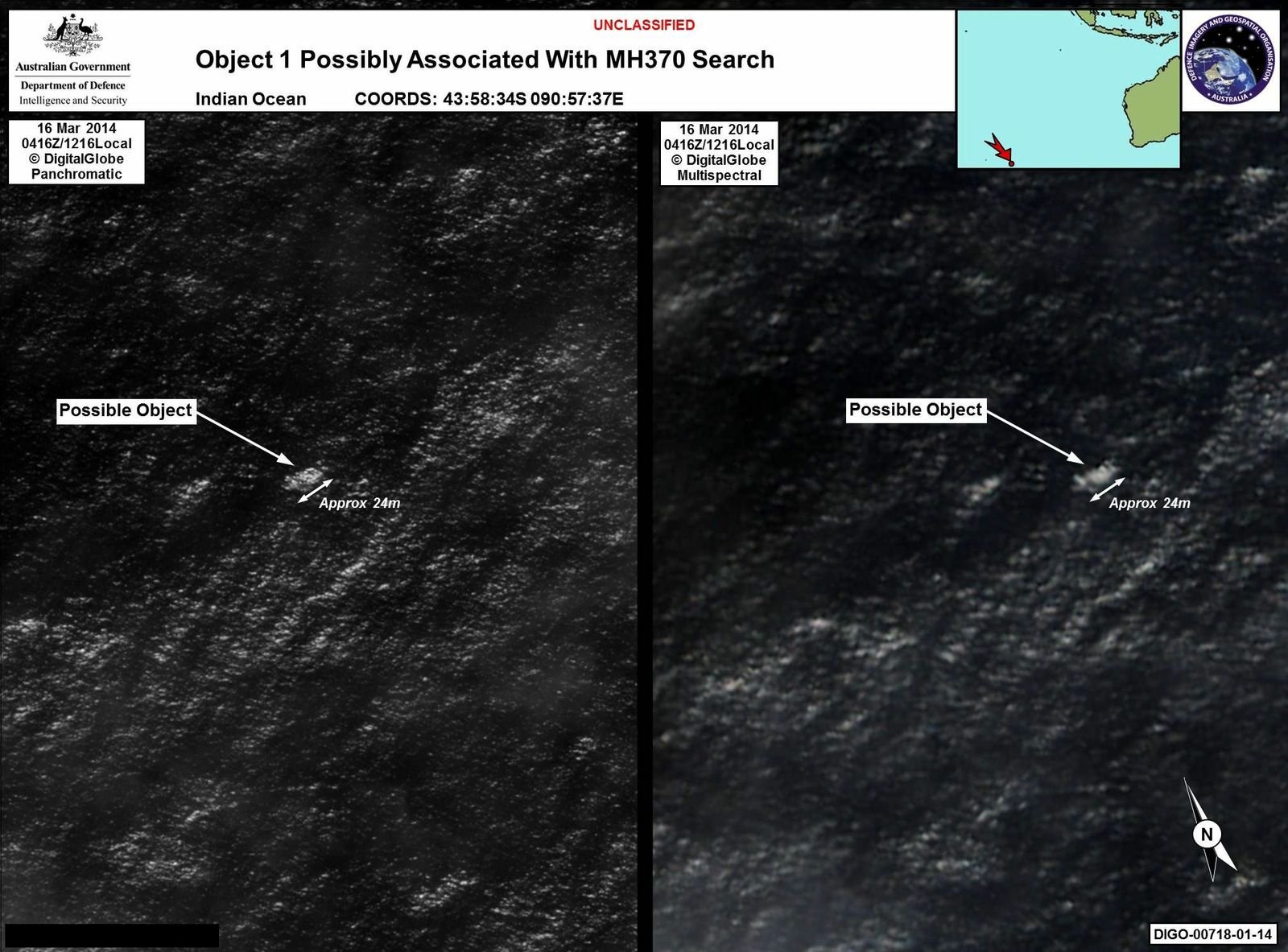 KUALA LUMPUR, Malaysia (CNN) — Two objects spotted by satellite in the southern Indian Ocean may be debris from the missing Malaysia Airlines Flight 370, Australian authorities said Thursday, fueling cautious hopes of a breakthrough in an international search of unprecedented scale.

Three more planes, a merchant ship and an Australian naval ship were on their way to the scene, officials said.

Authorities cautioned the objects could be something else — shipping containers that fell off a vessel, for instance. But they said they represent the best lead so far in the search for the missing airliner, which vanished 13 days ago with 239 passengers and crew aboard.

“At least there is a credible lead,” Malaysia’s interim Transportation Secretary Hishammuddin Hussein told reporters. “That gives us hope. As long as there’s hope, we will continue.”

Australian officials first announced the news to the world in a briefing closely watched by relatives of some of the missing at the Lido hotel in Beijing. They gathered around a large-screen television to watch the Australian news conference, leaning forward in their chairs, hanging on every word. Some sighed loudly.

While Hishammuddin said efforts are intensifying around the site of the Australian discovery, he said the search will continue across the massive search zone until authorities can give the families answers.

“For the families around the world, the one piece of information that they want most is the information we just don’t have: the location of MH370,” he said.

Satellites captured images of the objects about 14 miles (23 kilometers) from each other and about 1,500 miles (2,400 kilometers) southwest of Australia’s west coast. The area is a remote, rarely traveled expanse of ocean far from commercial shipping lanes.

They are indistinct but of “reasonable size,” with the largest about 24 meters (79 feet) across, said John Young, general manager of emergency response for the Australian maritime agency.

They appear to be “awash with water and bobbing up and down,” Young said.

The objects could be from the plane, but they could be also something else — like a shipping container — caught in swirling currents known for creating garbage patches in the open ocean, he said.

“It is probably the best lead we have right now,” Young said. “But we need to get there, find them, see them, assess them to know whether it’s really meaningful or not.”

The size of the objects concerned David Gallo, one of the leaders of the search for Air France Flight 447, which crashed in the Atlantic Ocean in 2009.

“It’s a big piece of aircraft to have survived something like this,” he said, adding that if it is from the aircraft, it could be part of the tail.

The tail height of a Boeing 777, the model of the missing Malaysian plane, is 60 feet.

Mary Schiavo, a CNN aviation analyst and former inspector general for the U.S. Department of Transportation, said she believes Australian officials would not have announced the find if they weren’t fairly sure of what they had discovered.

“There have been so many false leads and so many starts and changes and then backtracking in the investigation,” she said. “He wouldn’t have come forward and said if they weren’t fairly certain.”

Although the overall search area spans a huge expanse of 3 million square miles, U.S. officials have been insistent in recent days that the aircraft is likely to be found somewhere in the southern Indian Ocean.

Until searchers make a confirmed find of debris from the aircraft, the search and rescue operation will continue throughout the search zone, Hishammuddin said.

Even as the focus shifted to the remote southern Indian Ocean, Hishammuddin said Malaysia was sending two aircraft to search Kazakhstan in central Asia. That’s one of the locations along a northern corridor described as a possible location for the aircraft based on satellite pings sent by the plane after air traffic controllers lost contact with it in the early hours of March 8.

Cambodia, Laos, Thailand and China were searching their territories, Hishammuddin said. Meanwhile, 18 ships, 29 aircraft and six helicopters were taking part in the search in the southern corridor, where search efforts were intensifying in the area around the Australian satellite find.

In addition to the Australian surveillance plane that flew over the area Thursday afternoon, three other planes were being dispatched to the region, including a New Zealand Air Force Orion and U.S. Navy P-8 Poseidon.

An Australian C-130 Hercules plane has been tasked by Australian authorities to drop marker buoys in the area, Young said.

“The first thing they need to do is put eyes on the debris from one of the aircraft,” said aviation expert Bill Waddock. The buoys will mark the place and transmit location data.

A merchant ship helping Australian authorities in the search was also expected to arrive in the area Thursday. The Australian naval vessel HMAS Success was also steaming to the site, but was “some days away,” Hishammuddin said.

The Malaysian navy has six ships with three helicopters heading to the southern Indian Ocean to take part in the search, a Malaysian government source said.

“Verification might take some time. It is very far and it will take some time to locate and verify the objects,” the source said.

The lack of progress has angered and frustrated families, who have accused Malaysian officials of withholding information.

Some family members staged a protest Wednesday at the Kuala Lumpur hotel where members of the media covering the search are staying. Their efforts were cut short by security guards who removed them through a crush of reporters, dragging one as she screamed.

“I don’t care what your government does,” one woman shouted, referring to the Malaysians. “I just want my son back.”

The agony of the wait is also felt by families in Beijing, the scheduled destination for Flight 370. They gather daily for a briefing with officials.

Ye Lun, whose brother-in-law is on the missing plane, says every day is the same. He and his group leave the hotel in the morning for a daily briefing, and that’s it. They go back to the hotel to watch the news on television.