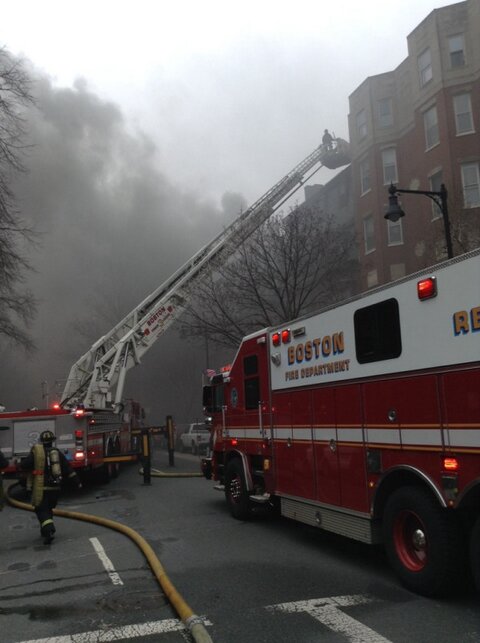 By Kevin Conlon and Dana Ford

(CNN) — A nine-alarm fire broke out Wednesday at a brick brownstone in Boston’s Back Bay neighborhood, killing at least two firefighters and injuring more than a dozen people, officials said.

The deaths were confirmed by a public safety source, who spoke on the condition of anonymity.

The fire began in the basement and quickly climbed up the four-story building, the Boston Fire Department said on its Twitter page.

It posted images of the blaze, showing firefighters attending to someone on a stretcher.

The area is west of downtown Boston, near the Charles River. Video showed smoke rising over the city.

On its Twitter page, Boston Emergency Medical Services said that it had transported 18 patients to area hospitals from the Beacon Street blaze.

Three firefighters were injured, one seriously, Boston Fire Department spokesman Steve MacDonald told reporters before news of the deaths. He said that more than 150 firefighters and between 20 and 30 trucks responded to the incident.

Fire officials were conducing a roll call to make sure everyone is accounted for, the spokesman said. The cause of the blaze was not immediately clear.

Mark Bristol, an eyewitness, told CNN affiliate WCVB, that he saw people climbing down the building’s fire escape. The affiliate reported that strong winds were fanning the flames, complicating efforts to put the fire out.

“I watched it go from pretty small to really, really big — like there was just smoke absolutely pouring out the front entrance,” Bristol said.