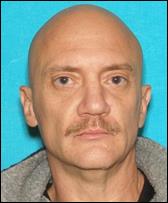 Michael Alexander Bacon, 45, is described as a white male who stands 5-feet 11-inches tall and weighs about 200 pounds. He has a tanned face, blue eyes and is balding.

According to information from the Salt Lake City Police Department, investigators believe the suspect is traveling with his ex-wife, a 36-year-old female who is white and stands 5-feet 9-inches tall and weighs 143 pounds. She has hazel eyes and red hair.

The news release states the two are in possession of a stolen car—a white 1994 Pontiac Sunbird with Utah license plate number Y848PP. The vehicle pictured above is not the same vehicle, but is the same make and model.

Anyone who sees Bacon or who knows where he is should call the Salt Lake City Police Department at (801) 799-3000. Tips may also be sent anonymously by texting the keyword TIPSLCPD plus any relevant information to 274637. Tipsters should reference case #14-27736.