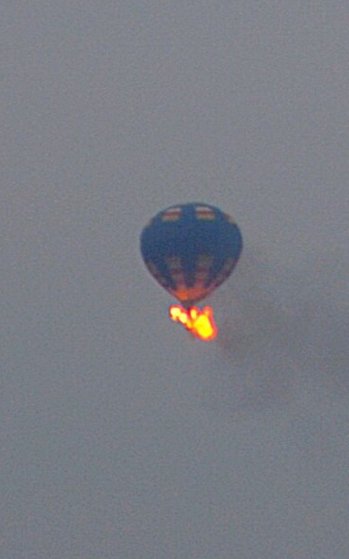 By Mariano Castillo and Ben Brumfield

(CNN) — About 100 state troopers and deputies planned to search through the night for the third occupant of a hot air balloon that crashed in flames at a Virginia balloon festival, killing the other two people on board, state police said Saturday.

Witnesses captured photographs of the balloon after it drifted into power lines, burst into flames Friday night and crashed into the countryside about 25 miles north of Richmond. Some reported seeing two people either jump or fall from the basket at a dizzying height.

Two members of the University of Richmond women’s basketball program were among those aboard, a person familiar with the university’s athletic department told CNN.

Geller said police know who was aboard the balloon, but won’t name them publicly until the medical examiner makes positive identifications.

The basket and the balloon separated at some point; neither had been found.

Earlier Saturday, Geller told reporters the effort had transitioned from rescue to recovery.

The Federal Aviation Administration and National Transportation Safety Board are investigating the crash.

“We will investigate the man, machine and the environment,” NTSB air safety investigator Heidi Moats said.

Weather conditions are one of the elements investigator are looking at, Moats said, though there was no inclement weather at the time and, so far, officials don’t believe those conditions played a role in the crash, Geller said.

Thirteen hot air balloons had been soaring on the eve of the Mid-Atlantic Balloon Festival in Doswell, and three were landing close to each other. Two landed safely, Geller said, but as the third balloon descended, it hit a power line, sparking a fire that spread quickly.

The pilot began doing his safety maneuvers and “took every step to manage the situation,” the spokeswoman said. But then there was an explosion and the basket and balloon separated.

Those aboard the balloon pleaded for their lives, witness Carrie Hager-Bradley told CNN affiliate WWBT.

Her daughter told her she saw someone falling out of the basket. Then Hager-Bradley also saw someone plummeting to the ground.

Organizers canceled the festival after the accident.

CNN’s Mandy Lawrence and Melissa Gray contributed to this report.