SANDY, Utah – Police have arrested the second suspect in a home invasion robbery that was allegedly carried out in Sandy Thursday by individuals impersonating police officers.

Andrew Perry Russell, 21, was arrested at a residence in Midvale Saturday around 6:30 p.m. without incident after officers responding to a citizen tip set up a containment, according to a press release from the Sandy City Police Department.

Midvale resident John Love was working in his yard when the arrest occurred.

“They were saying, 'Andrew Russell come out of the house, this is the police,'" he said. "I poked my head out over the fence and thought there was maybe three to four cops, there was 40 of them. Just cars from that end of the street all the way to the other end of the street. Blocked off with SWAT and guns."

Love took several pictures of the scene as police arrived, see the gallery below for the photos.

Sgt. Jon Arnold of the Sandy City Police Department said the nature of the crime the man was accused of was the reason they brought SWAT resources to the arrest.

“We set up containment on the residence," he said. "Due to the nature of the violence that was used in original incident, we had SWAT come out and help set up that containment."

Russell is one of two suspects who allegedly impersonated police officers and pushed their way into an apartment Thursday morning. The pair got into an altercation with the owner of the residence, located near 745 E. 9140 South. Click here for more details regarding the robbery.

Another man suspected in the robbery, 20-year-old Kenneth Colton Foote, was arrested at his place of employment Friday. He faces burglary, theft and assault charges as well as a charge of impersonating a police officer. He was booked into the Salt Lake County Metro Jail.

Police stated in the press release: “We would like to thank the media for their assistance in getting Andrew’s photo out to the public. It was a tip from a concerned citizen, who wishes to remain anonymous, that led to this arrest.”

Arnold said they are glad to have arrested individuals who allegedly misrepresented themselves as police.

“We as law enforcement depend on the trust of our citizens to get work done, and when people go out and take advantage of that trust its not a good thing so we’re happy to have these guys in custody,”he said. 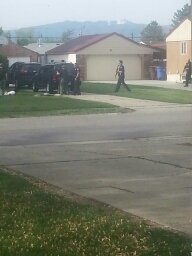