[Editor's Note: Albuquerque Isotopes players Alex Guerrero and Miguel Olivo allegedly fought during a game on Utah's "Prevention Dimensions Day."  Thousands of fifth and sixth-grade students were in attendance at the game as a reward for their participation in the "Prevention Dimensions" program, which is a lesson set used to educate students on preventing violence and substance abuse.]

(CNN) -- A professional baseball player landed in a hospital after a game this week with a bite wound to the ear, police said.

Alex Guerrero, second-baseman for the Albuquerque Isotopes, could be seen quarreling on the field with his teammate, catcher Miguel Olivo, during a game against the Salt Lake Bees on Tuesday.

Video posted to MiLB.com showed teammates stepping between the two, as they taunted each other.

The site, which bears the title "the official site of minor league baseball," reported that not much later, in the eighth inning, the two fought in the team's dugout.

A photo on MiLB.com showed Guerrero holding a towel to his ear.

The Triple-A game was temporarily suspended and both players were replaced by substitutes.

The injured player was transported to a hospital in Murray, Utah, said Salt Lake Police detective Greg Wilking. Authorities there told Wilking that "an ear had been bitten off."

"Whether it be boxing, Little League Baseball, professional baseball - you have to respect the ear. You cannot be, you know, assaulting in this manner," said Det. Veronica Montoya, Salt Lake City Police Department. "It can be a serious crime."

Guerrero declined to file a report with law officers.

"He wanted to talk to a lawyer and the league before he decides what he wants to do," Wilking said.

The Isotopes, who lost to the Bees 7-4, got behind early in the game, allowing Salt Lake 4 runs in the first inning. Both teams have losing records.

Olivo became angry and confronted Guerrero on the field in the seventh inning, after the second-basemen did not tag a player out when Olivo threw the ball to him, MiLB.com reported.

The Isotopes are a farm team of the Los Angeles Dodgers, which issued a statement on the incident.

"The baseball operations department is aware of the altercation and is conducting an investigation into the matter. The organization does not condone this type of behavior," it said.

Both men also play in games for the Dodgers in the majors. Guerrero, who defected from Cuba in 2013 signed a four-year $28 million contract with the club. 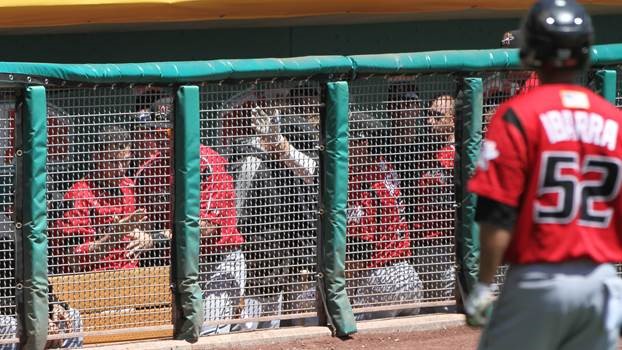