OGDEN, Utah -- Ogden police have identified the man who they said was found shot to death Thursday night, and police said Friday they are investigating the death as a homicide and are seeking a person of interest in the case.

In a tweet sent Friday night, Ogden police officials said the person of interest, 45-year-old Shawn Gerrald Boehme, is considered dangerous and caution should be used by those who come in contact with him.

"He is someone we want to talk to because we think he knows something about what happened," said John Harvey, who is the deputy director of administration for the Ogden Police Department.

Police said the body of Elgie Ray Mills, Jr., 43,  was found in a workshop at 2930 W Pennsylvania Ave. Harvey said Boehme and Mills knew each other, but he said the exact nature of their relationship is unclear.

According to a press release from Ogden PD, a woman notified police she had found Mills' body around 10:15.

Ogden police described Mills as a victim in a posting on their Twitter account. In a press release issued Friday, officials said the death is now being investigated as a homicide and that several witnesses are being interviewed and search warrants are being served.

Police are seeking  Boehme, who they said is not a suspect at this time but a person of interest. The man is pictured in the gallery below, as is a photo of a truck similar to the vehicle he may have been driving--a 1989 Ford F150 pickup truck with Utah license plate number Y192RM. The truck is orange or red in color and has an extra cab and gray top, according to the press release.

Police officials tweeted Friday night that they were canceling the attempt to locate on the truck, which was found abandoned in west Weber County.

Todd Davis works at a business near where Mills was found, and he said Boehme worked in the building were the body was found.

"The people in the unit are mechanics, father and son, and the son has worked on my vehicles before," he said.

Angie Elliot, Mills' ex-sister-in-law, said Mills was a, "very kind and generous man and he loved his kids. He may not have shown it all the time but he did love his children, and he loves his family, his parents."

Anyone with information about the incident is asked to call police at 801-629-8221. Police said anonymous tips could be submitted online, click here to leave a tip.

Police said an autopsy will be performed Friday to determine the cause of death. 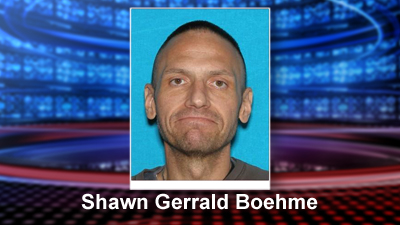