SYRACUSE, Utah -- Police were involved in a pursuit of a car Saturday, and dramatic video from a FOX 13 News viewer shows the car speeding across the grass of Founders Park as children frantically move out of the way.

The chase ended around 6:12 p.m. at 1500 S. Banbury Drive in Syracuse, and police officials said a minor had taken the vehicle without permission and officers sought the vehicle on a breach of trust.

The 14-year-old male driving the car is from Sunset and had taken the vehicle from his grandfather in Duchesne County, and the grandfather reported the car stolen, according to a press release from the Syracuse Police Department. Police put out an attempt to locate, and police responded after a tipster spotted the car in Syracuse. The tipster heard the attempt to locate while using a police scanner app on a smart phone.

Syracuse Police Department officials responded to the call, and video footage of the chase is available above. A photo from the scene shows the same car that tore through the park collided with a pickup truck. A second photo shows the damage to both vehicles, see the gallery below.  Another video, courtesy of Bryson and Brandy Rowley, shows the moment of impact:

Bryson Rowley was driving the truck, and he said he intentionally used his truck as a ram rod to stop the fleeing vehicle. Rowley provided the pictures and videos in this story, and he said he acted to end the chase because he was afraid for the safety of his and other children at the park.

“The person driving the truck could see it was turning back into the park, and he did not want the car to hit all of the children, or any of the children, and he actually pulled his truck in the way so the car collided with the truck,” said Officer Erin Behm with the Syracuse Police Department.

“My heart dropped," she said. "I honestly thought one of those kids is going to die."

In the days that followed the incident, many people hailed Rowley as a hero and several people offered to repair his truck for free. He spoke with FOX 13 News about the support he's received and about his decision to intervene in the chase, click here for that interview.

Officials said the teen was taken to a nearby juvenile detention center. 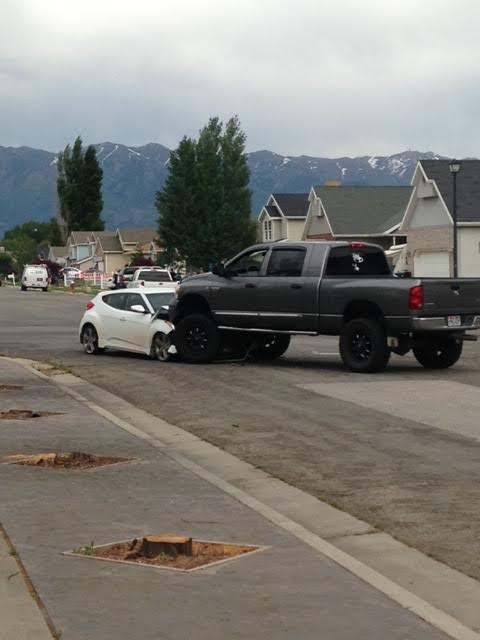