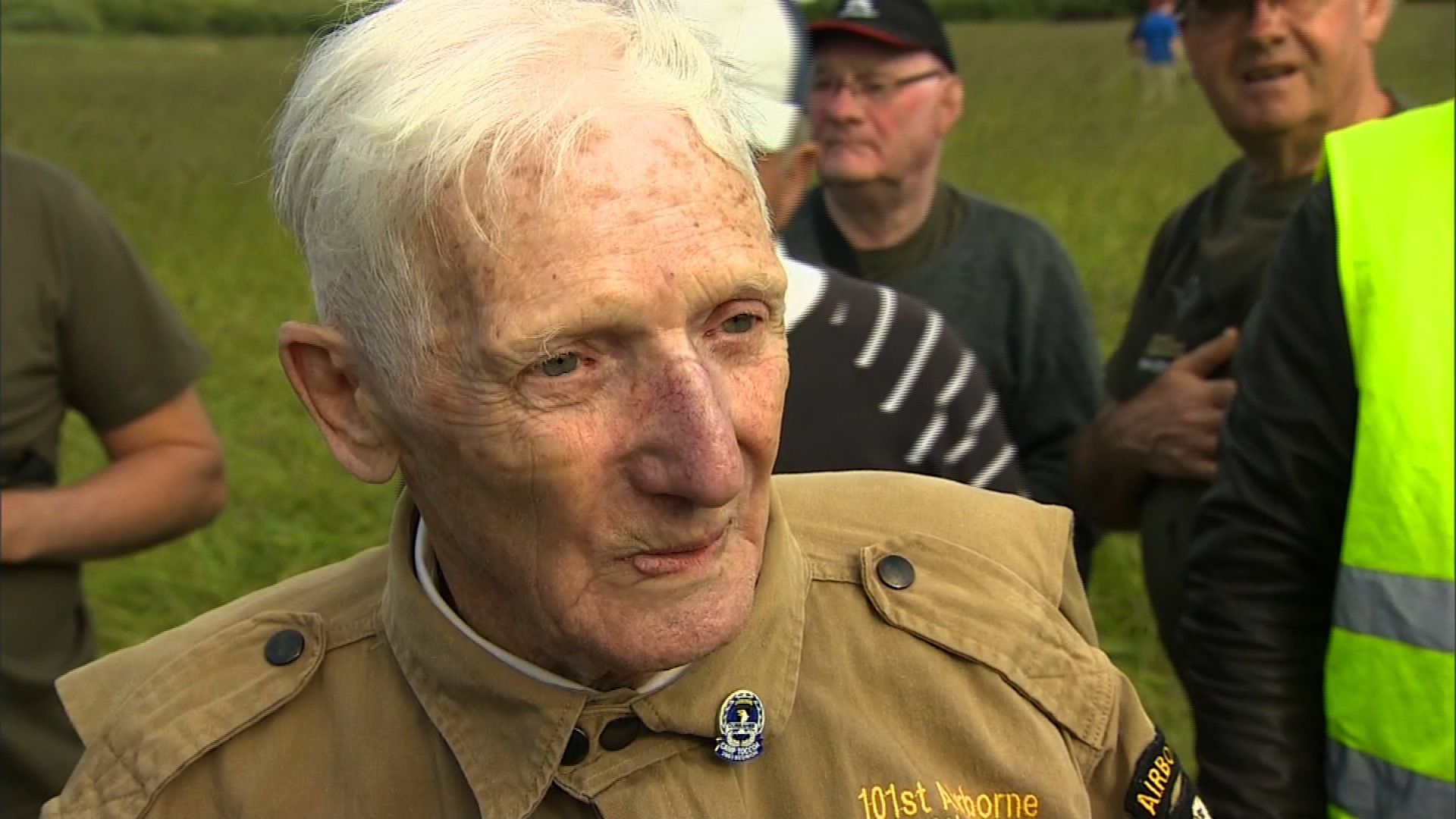 By Jim Bittermann and Greg Botelho

NORMANDY, France (CNN) — Jim “Pee Wee” Martin acted like he’d been here before, like jumping from a plane is as easy as falling off a log.

Martin was part of the U.S. 101st Airborne Division that parachuted down over Utah Beach in their bid to retake France and, eventually, the rest of Europe from Nazi Germany. They actually touched down in enemy-controlled territory a night before what’s referred to as D-Day.

His jump Thursday in the same area was different and — despite his being 93 years old now — a whole lot easier.

“It didn’t (compare),” Martin said, “because there wasn’t anybody shooting at me today.”

Every year, every day it seems, the number of surviving World War II veterans like Martin dwindles. He estimates there are only a few dozen members of his unit who took part in the now historic D-Day invasion who are still around.

It’s ironic, in a sense, because Martin was among the oldest of his bunch in June 1944 — at 23 years old — surrounded by others who were mere teenagers.

Together, they parachuted onto France’s northern coast in the dark of night not knowing what awaited them. Whatever it was, it would not be friendly or easy, they expected.

“Everybody (was) scared all the time, and if they tell you anything differently they are full of crap,” the former paratrooper recalled. “But you just do what you had to do regardless of it. That’s the difference.”

And they didn’t stop. According to a Facebook page he regularly updates, Martin fought for 43 days as part of the Normandy campaign before moving onto invade Holland, fending off Nazi fighters during the Battle of the Bulge and finishing off by taking Berchtesgaden, site of Hitler’s “Eagle’s Nest” redoubt in the German Alps.

None of it was easy, but Martin insists, “I don’t ever have flashbacks. Never. Nothing ever bothered me.”

All these years later, he has become a celebrity of sorts — as evidenced by a mob of reporters who greeted him after his parachute landing Thursday. Martin says he feels “kind of humbled and embarrassed at the adulation because I don’t feel we did anything that we weren’t supposed to do or anything exceptional.”

He adds: “We just did what we trained to do.”

Seven decades later, Martin did it again — not fighting a bloody war but at least reliving his role in a military campaign that changed the course of history. Others joined him in this now daytime jump, though he was the only one from his generation.

This time, he said that he wasn’t scared because, “once you get in the plane, you forget everything.” Bored would be more like it.

As he told reporters afterward, “To tell you the truth, riding around in the plane is boring. It’s when you get off the plane, that’s when it gets exciting … But there’s no fear to it. It’s just something you do.”

Martin admitted that he was motivated by “a little bit of ego, (to show that) I’m 93 and I can still do it.”

“And also I just want to show all the people that you don’t have to sit and die just because you get old,” he added. “Keep doing things.”

Among those things he’d like to do is another jump in the same plane, one year from now.

“If I come back next year, I’ll make a jump next year. You can bet on it.”