The video above is courtesy FOX 13 sister station KTXL FOX 40. Visit their website for updates on this story. The text and photos below are courtesy CNN.

(CNN) — Jose Maldonado was getting off the bus when the suspects exited the Stockton, California, bank with their hostages.

Police had already arrived at the Bank of the West, the witness told CNN affiliate KOVR-TV on Wednesday, but authorities couldn’t take out the assailants, not with their guns trained on a customer and two bank employees.

“There was three guys, had three guns and three hostages, and they had the guns to the hostages’ heads,” Maldonado told the Sacramento station. “They were petrified. Their faces were white. They were just so scared.”

Climbing into a Ford Explorer belonging to one of the hostages, the robbery suspects made one of the hostages drive. Police “surrounded the car, and they just couldn’t shoot at them because they were so close to the hostages. They just drove right out of the parking lot,” Maldonado said.

The security guard who called the police had been tied up inside the bank amid frightened patrons and tellers, authorities said.

As the suspects fled, a 12-year-old was left stranded in the parking lot after her mother, who had gone inside to withdraw money, became one of the three hostages. The girl texted her father saying, “They took mom,” a man who identified himself as Devin J., one of the woman’s cousins, told a local television station.

For the next hour, police would chase the SUV on surface streets and interstates through Lodi to Acampo, then 20 miles back to Stockton. Gunfire from a semiautomatic “AK-47-type assault rifle” and other weapons struck 14 of the 50 or so squad cars that gave chase, police said.

Several police cars and an assault vehicle were disabled in the chase and gunfight, police said.

What concerned Stockton Police Chief Eric Jones most was the perpetrators’ recklessness and wanton violence, he said. Two female hostages either jumped or were thrown from the vehicle — one shot, one grazed — and the third victim, the mother, was killed.

It wasn’t clear whether police or the robbers killed her, but one suspect acknowledged using her as a human shield, Jones said.

The other two hostages are expected to survive, he said.

Asked why police opened fire on the men when they held a woman hostage, police spokesman Joseph Silva told reporters, “There was a fear for safety, not only for our officers, but also for the community.”

Jones added during a Thursday news conference that it was “frankly amazing” no officers were hit, though some had close calls. More than 20 officers were on paid leave as of Thursday per department policy following a shooting, he said.

The suspects, who were gang members or associates, were armed to the teeth, the chief said, and appeared to be out for blood.

“The suspects had mass amounts of ammunition, either taped to or strapped to their bodies. The gunfire on our officers was relentless,” he said.

They not only hit homes and cars on busy streets with their bullets, but also they lost police at one point, Jones said. Rather than pressing the pedal to the floor, putting distance between them and the dozens of officers tracking them, they stopped to set up an ambush, he said.

“They briefly lost officers and then stopped off of the roadway off-ramp and turned and had their weapons aimed at the officers who were soon to make the turn looking for them,” he said.

Fortunately, a police commander in an unmarked car saw them setting up their trap and fired on a gunman leaning over the back of the SUV, sparking another pursuit, Jones said.

“That officer likely thwarted a deadly ambush,” he said.

Witnesses abound. Some saw one of the hostages lying in the street. Others saw officers in hot pursuit through California streets and highways. Many heard the violent gunbattle that brought the deadly chase to its end.

“It sounded like firecrackers at first,” one witness told CNN affiliate KCRA-TV.

Another told the station, “I could see the car getting blasted. I could see all the little sparks and everything off the car.”

Amateur video obtained by CNN affiliate KOVR shows the final moments. It sounds as if someone set off a long string of firecrackers as puffs of smoke rise from the blue Ford Explorer facing off with police cars. Then the gunfire stops, and the only sound on the video is the wail of police sirens.

“It sounded like five minutes of straight gunfire,” Sam York told KCRA. “It seemed like it wasn’t real.”

One of the suspects had been killed, police said. Another was injured and would die later at a local hospital. Neither has been identified, but one was 27, the other 30, police said. They were both documented members of the Norteños street gang, and the 27-year-old, the primary shooter, had an arrest record, Jones said.

The Norteños are a problem in Stockton, he said.

The surviving suspect, Jaime Ramos, 19, of Stockton was wrapped in a yellow blanket and escorted to a police car, where he was taken to San Joaquin County Jail and booked on felony charges of murder, kidnapping, robbery and attempted homicide of police officers. He is expected to make a court appearance Monday.

Ramos is an associate of known gang members, and he revealed to police that he was uninjured in the gunfire exchange because he used the last remaining hostage as a shield, the chief said.

Many questions remain, namely whether police or the suspects killed the woman found inside the assailants’ SUV, but Jones told the media it could take “some time” to answer that particular question. His officers, along with state and federal authorities, were investigating every angle, he assured reporters.

No matter what they learn, Jones said, one thing is certain: Authorities did not want the situation to end the way it did. 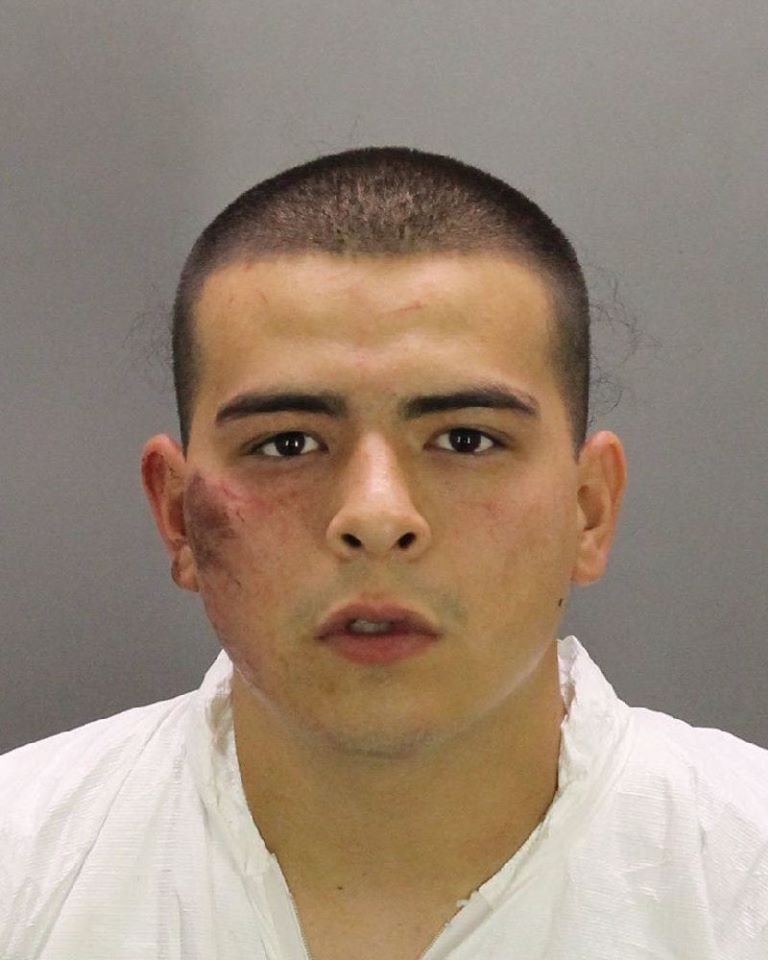