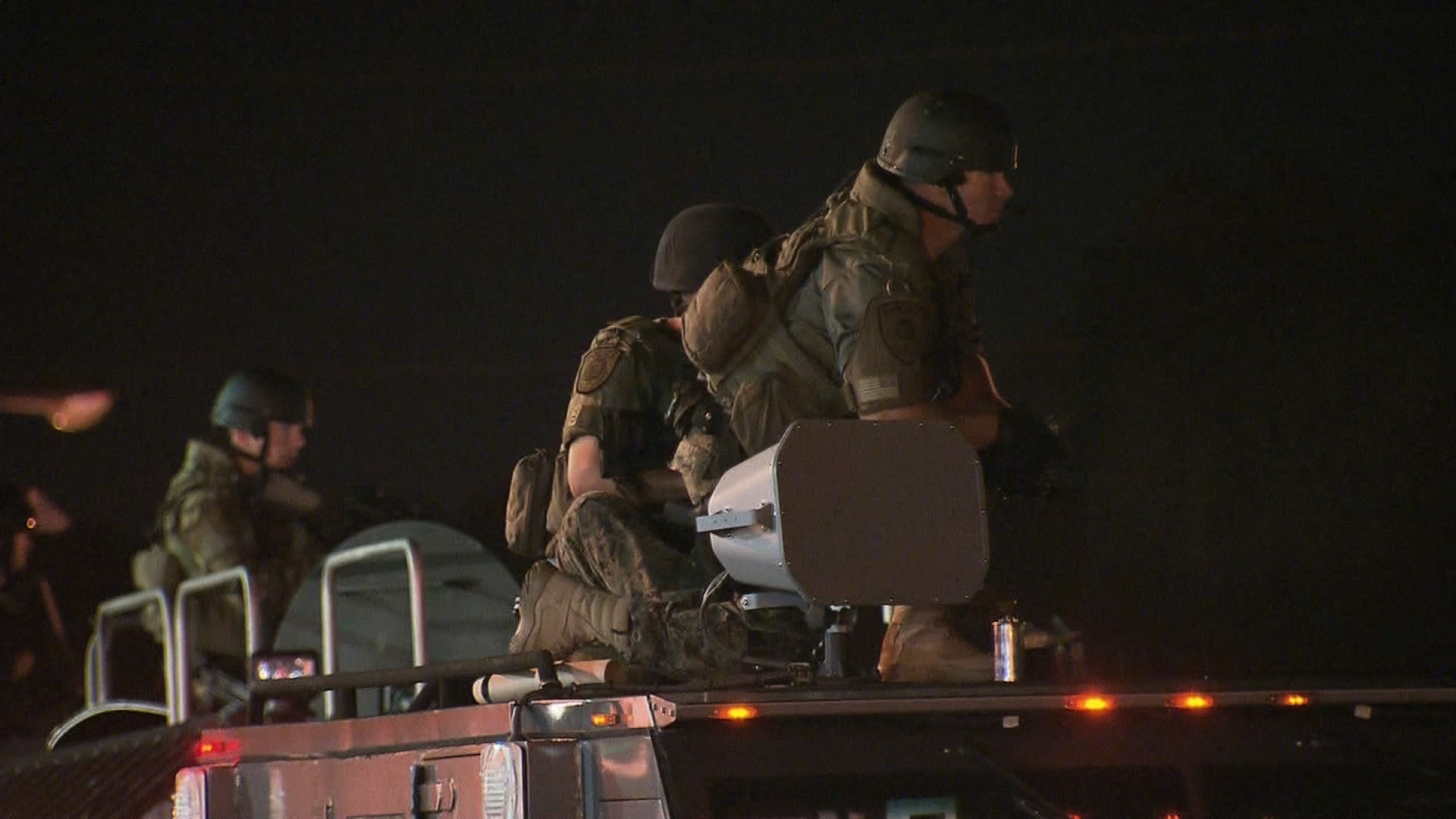 FERGUSON, Missouri (CNN) — State troopers are taking over security in Ferguson, Missouri, after days of clashes between local police and protesters.

Gov. Jay Nixon said he decided to put the Missouri State Highway Patrol in charge of security because “at this particular point, the attitudes weren’t improving, and the blocks towards expression appeared to be a flashpoint.”

Lately, the community of Ferguson, which has been the scene of clashes in the wake of a weekend police shooting that left teenager Michael Brown dead, has looked “more like a war zone, and it’s not acceptable,” Nixon said.

Now, authorities — who’ve faced accusations that they’ve used excessive force in response to demonstrations — will be taking a different tack in an effort to calm tensions, officials said Thursday.

“We’re all about making sure that we allow peaceful and appropriate protests, that we use force only when necessary, that we step back a little bit and let some of the energy be felt in this region, appropriately,” Nixon said

“We are going to have a different approach and have the approach that we’re in this together,” he said.

Earlier Thursday, the city’s police chief described it as a “powder keg.”

“The whole situation is not good at this point,” Chief Thomas Jackson said a day after clashes in which police fired smoke bombs, tear gas and rubber pellets at protesters who he said had thrown firebombs at police and engaged in gunfire.

Jackson said police would talk about changing “not only the tactics but also the appearance” of law enforcement.

U.S. Justice Department officials have offered to assist local authorities to help them control crowds “without relying on unnecessarily extreme displays of force,” Attorney General Eric Holder said in a statement Thursday. The offer has been accepted, he said.

Jackson said protesters also have to do their share by remaining peaceful.

“We need everybody to tone it down,” he said.

Governor: ‘This has clearly touched a nerve’

Ferguson has been the scene of protests since Saturday, when a police officer shot and killed Brown, who was unarmed. Police say he was trying to grab the officer’s gun. Witnesses say the 18-year-old was holding his hands in the air when he was fatally shot.

Protesters are angry that police have not released the officer’s name and worry that a cover-up is in effect. St. Louis County police and federal investigators are looking into Brown’s death. No charges have been filed.

Although locals say race relations have long been troubled between the city’s mostly African-American population and the mostly white police force, anger spilled out after Brown’s death, resulting in protests, violence, looting and fires.

Brown’s death and protests over the case have resonated far beyond that city, Nixon said Thursday.

“These are deep and existing problems not only in Missouri but in America, and this has clearly touched a nerve,” he said.

“There is never an excuse for violence against police or for those who would use this tragedy as a cover for vandalism or looting,” he said. “There is also no excuse for police to use excessive force against peaceful protests or to throw protesters in jail for lawfully exercising their First Amendment rights.”

Their comments came after a night in which heavily armed police and protesters clashed, two reporters were briefly detained and an Al Jazeera America camera crew complained that police shot tear gas at them.

Twelve people were arrested, Jackson said. Two officers were injured, including one whose ankle was broken when a brick was thrown at him.

Jackson has declined to comment on much of the evidence in the case, saying investigators need time to assess forensic details, toxicology reports and witness statements before deciding how to proceed.

He did say the officer who shot Brown was treated at a hospital for facial swelling after the incident. He didn’t say what happened to the officer, but police have said Brown and the officer fought.

Although police say the officer shot Brown during a dangerous struggle, witnesses said the teenager was running away when the officer first shot at him.

Two witnesses said Wednesday that while Brown did appear to tussle with an officer before he was shot, he didn’t enter the police cruiser as authorities say he did.

“It looked as if Michael was pushing off and the cop was trying to pull him in,” Tiffany Mitchell told CNN’s Don Lemon.

A shot went off, Brown broke free, and the officer got out of the vehicle in pursuit, the women said.

“I saw the police chase him … down the street and shoot him down,” Mitchell’s co-worker Piaget Crenshaw said. Brown ran about 20 feet, she said.

Then, “Michael jerks his body, as if he’s been hit,” Mitchell said.

Finally, he faced the officer and put his hands in the air, but the officer kept firing, both women said. He sank to the pavement.

The women’s accounts corroborate that of a previous witness; all three said the officer fatally shot the unarmed teen.

Police assembled in tactical gear near the protesters, ordering them to disperse.

The St. Louis Post-Dispatch described police placing “high-caliber automatic weapons” on tripods atop armored vehicles and pointing them at protesters.

Police fired tear gas canisters at a crowd near a gas station that has turned into a gathering point for rowdy protests after dark.

Officers raised their guns at people heading for the protest, yelling for them to turn back.

As protesters scattered from the thick clouds of tear gas, officers in riot gear marched slowly in their direction to clear the area, ordering protesters and reporters filming to shut off their cameras, according to media reports.

A tear gas canister landed directly in front of the live television reporting position of Al Jazeera America; the crew ran, leaving its equipment behind. Then an officer approached the camera and pointed it at the ground, CNN affiliate KSDK reported.

Al Jazeera America issued a statement calling the incident an “egregious assault on the freedom of the press that was clearly intended to have a chilling effect on our ability to cover this important story.”

Earlier in the day, police detained and released two journalists — Wesley Lowery of The Washington Post and Ryan Reilly of The Huffington Post — who had been covering the shooting and the unrest. Neither was charged.

They said they were taken into custody at a McDonald’s restaurant, where they were working, for failing to meet a police officer’s deadline to pack up their gear and move.

“All of this went down, as you can see in the video, in less than two minutes,” Lowery told CNN’s “New Day.”

“The idea that we posed any sort of threat because we weren’t quickly enough packing up our bags is just ludicrous,” Reilly told “New Day.”

Jackson said Thursday that he does not know why the reporters were detained. He also said he did not know about the Al Jazeera complaint.

“The media is not a target,” he said.

Obama decried the treatment of the journalists, saying that “here in the United States of America, police should not be bullying or arresting journalists who are just trying to do their jobs and report to the American people what they see on the ground.”

In all, police arrested 12 people — including the two reporters — Wednesday night, Jackson said, bringing the total since the weekend to 65. He had previously said that 18 people had been arrested.

Much of the anger among protesters has been directed at officials who have refused to release the name of the officer who shot Brown. Officials say police officers, and others in the administration and police force, have been subjected to death threats.

On Wednesday, the American Civil Liberties Union of Missouri filed a lawsuit seeking the release of the officer’s name under the state’s open records law.

It’s unclear whether the suit will succeed. Missouri law provides a specific exemption barring the release of records that authorities conclude are “likely to pose a clear and present danger” to victims, witnesses or others.

On Thursday, the shadowy activist group Anonymous published the name of the officer it believes responsible for the shooting. Earlier, the group claimed to have hacked the city servers and obtained dispatch recordings and other information.

Jackson later said the group had the wrong officer. CNN is not reporting the name.

Jackson was supposed to meet Thursday with Brown’s mother, the NAACP and a Department of Justice representative, but he said that meeting had to be postponed at the request of family attorney Benjamin Crump. He still hoped to meet with them Thursday.

Crump said Brown’s family is frustrated with the lack of information from police.

“Like all the people in that community and many people around the country, they’re just in shock that this could happen to an unarmed teenager in broad daylight,” he told CNN. “It makes no sense, and they feel there’s no way it could be justified.”

Have you documented the protests in Ferguson? Share your photos, videos and opinions with CNN iReport.