Fourth suspect arrested after stabbing that injured two in Magna 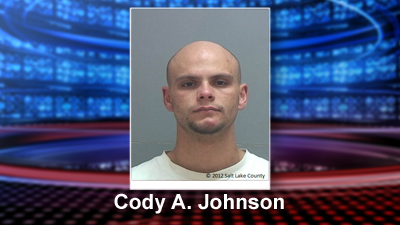 Update: Authorities have arrested the fourth suspect wanted after a double stabbing in Magna last week.

Unified Police said an anonymous tip led officers to an address in Kearns where Cody Johnson was taken into custody.

He was booked into the Salt Lake County Jail on two counts of aggravated assault and an outstanding warrant.

MAGNA, Utah – Three suspects were taken into custody and a fourth is still on the loose after two men were stabbed in Magna late Friday night, and both men suffered serious to critical injuries.

Police responded to the area of 3282 South 7780 West just before midnight Friday, where they found a 30-year-old male in critical condition and a 28-year-old male in serious condition. Both men had been stabbed.

The two victims had pulled up to a house and saw four other people there. The two victims asked the four what they were doing at the residence at that time of night, and an argument ensued. The argument escalated to a fight, which is when the two men were stabbed.

Police said the fourth suspect, Cody A. Johnson, is still being sought. Johnson is pictured above and is described as being a 26-year-old white male who stands 5-feet 7-inches tall and weighs 140 pounds. He is described as having brown eyes and as being bald. Police ask anyone who sees Johnson or knows his whereabouts to call police at 385-468-9820.

Two adult males, identified by police as Jeremy Crowther and Derek Andrews, were booked into the Salt Lake County Jail on two counts of aggravated assault, a second-degree felony charge.

A 16-year-old female was booked into a juvenile detention center on suspicion of aggravated assault.

The suspects and victims are not believed to have a previous relationship, and officials said they are still working to determine a motive in the crime.

Hoyal said the two victims remain in critical or serious condition respectively Saturday, but he said both are now considered to be stable. He said the victims suffered multiple stab wounds.