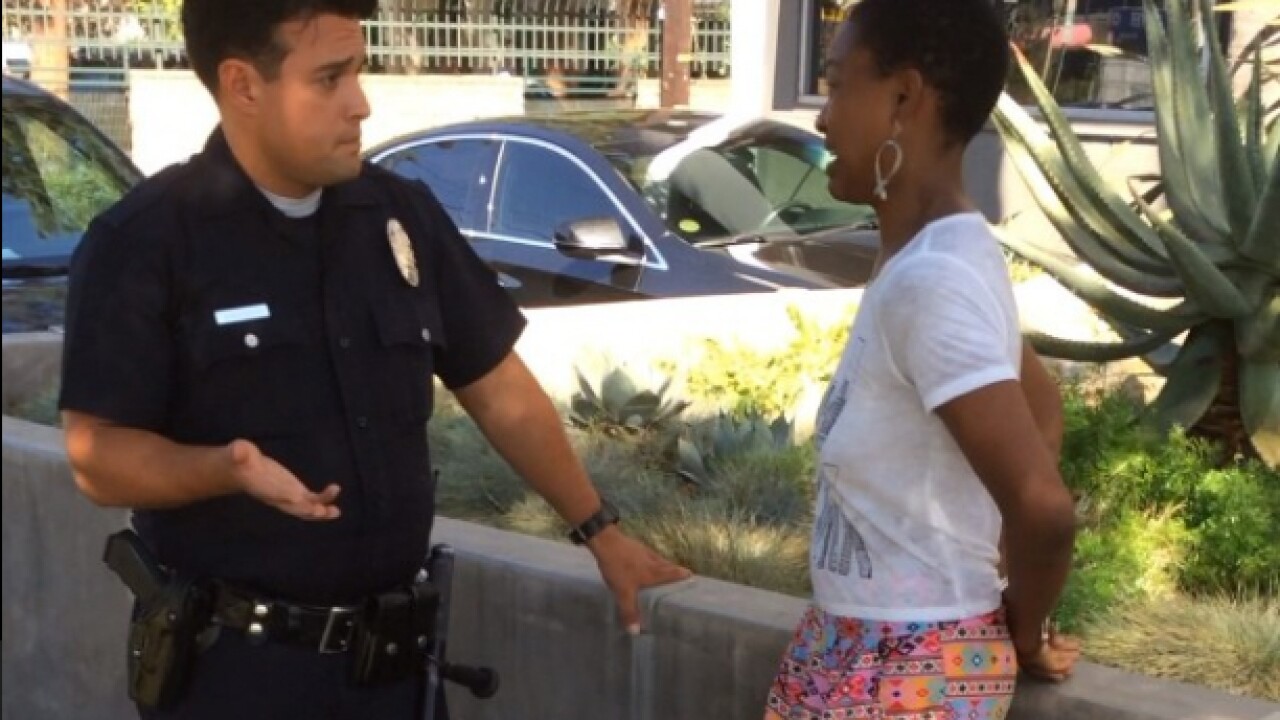 Today, #DanieleWatts & I were accosted by police officers after showing our affection publicly. From the questions that he asked me as D was already on her phone with her dad, I could tell that whoever called on us (including the officers), saw a tatted RAWKer white boy and a hot bootie shorted black girl and thought we were a HO (prostitute) & a TRICK (client). This is something that happened to her and her father when she was 16. What an assumption to make!!! Because of my past experience with the law, I gave him my ID knowing we did nothing wrong and when they asked D for hers, she refused to give it because they had no right to do so. So they handcuffed her and threw her roughly into the back of the cop car until they could figure out who she was. In the process of handcuffing her, they cut her wrist, which was truly NOT COOL!!! Our freedom isn't freedom folks, when people can abuse others with no reason or evidence at all just because they "think" they have been given the power by people that are ONLY equal to us. Of course, they had to let her go eventually cuz we weren't a threat to anyone. They weren't expecting D to be so intelligent and outspoken, and left truly feeling the fear vibration finding out that they had just fucked with 2 celebrities (Celebrated People). WE ALL HAVE THE SAME POWER INDIVIDUALLY IN THIS WORLD, AND I'M GLAD WE'RE ALL TAKING IT BACK ONE BEING AT A TIME! AllOne~OneLove!!! @WattsPlaying

The video above was posted by ‘Chefbelive’ to Instagram and shows a portion of the interaction between the couple and police.

Watts, who is African-American, and her white boyfriend accuse police of racism for questioning them after they were seen showing affection in public.

An LAPD spokesman told CNN Sunday that officers from its North Hollywood precinct were responding to a citizen complaint.

“There was an indication on the radio call that a male white and female black were involved in a sexual act inside a Mercedes with the vehicle door open,” Officer Sally Madera said.

Her boyfriend — Brian James Lucas but better known as celebrity chef Cheffy Be*Live — wrote in a Facebook post that police “saw a tatted RAWKer white boy and a hot bootie shorted black girl and thought we were a HO (prostitute) & a TRICK (client).”

“Two people were briefly detained, but it was revealed no crime had been committed,” Medera said.

The man was not handcuffed, but the woman was, according to the couple.

The alleged racial-profiling incident happened on a sidewalk near the gate of the CBS Studio Center in Studio City on Thursday.

The neighborhood is an upscale area and is home to many celebrities, including George Clooney, Miley Cyrus and Steve Martin.

The couple posted a short video clip and several photos showing Watts in handcuffs talking to police. One image shows a cut on her wrist, which she said was caused by the tight handcuffs.

Watts, who acts in the FX show “Partners,” said the officers “accosted me and forced me into handcuffs” after she refused “to agree that I had done something wrong by showing affection, fully clothed, in a public place.”

Lucas said when an officer asked for their identifications, he showed his that but Watts refused “to give it because they had no right to do so.”

“So they handcuffed her and threw her roughly into the back of the cop car until they could figure out who she was,” he wrote. “In the process of handcuffing her, they cut her wrist, which was truly NOT COOL!!!”

She was released “quite quickly when they realized we were right outside CBS and that she was a celebrity and I was a celeb chef,” Lucas wrote. “Before they figured out who she was they were threatening calling an ambulance and drugging her for being psychologically unstable, SO NOT COOL WHATSOEVER! ”

Watts and Lucas said they initially decided to forget about the incident, but then they decided they needed to speak up.

“We still forgive, love and bless them … just not putting up with this for our own freedom and heart space,” Lucas wrote.

The couple has contacted lawyers, the ACLU and the NAACP, he said. “Our publicist has us in contact with media about it, too, and we’re supposed to hear back.”

Watts, a native of Atlanta, made her feature film debut in 2012 as Coco in the Oscar-nominated “Django Unchained.” Her biggest television role is on “Partners,” in which she plays Martin Lawrence’s daughter.