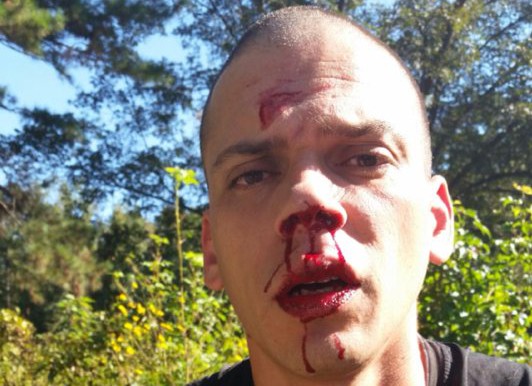 CABOT, Ark. – The suspect arrested in the murder of a missing Realtor emerged from a courthouse Tuesday and told reporters that he pleaded not guilty at the request of his lawyer but he wanted to plead guilty because he “just wants this to be over with,” according to CNN affiliate KARK.

Her body was found in a shallow grave near Cabot, about 20 miles northeast of central Little Rock.

Arron Lewis, of Jacksonville, will be charged with capital murder, the sheriff’s office said.

The Little Rock Police Department arrested Aaron Lewis, of Jacksonville, Arkansas, Monday, Sept. 29, 2014, after an arrest warrant issued Sunday said he was charged with kidnapping. The warrant provided no other details, but Lt. Carl Minden with Pulaski County Sheriff’s Office said Lewis was a suspect in the disappearance of Beverly Carter. – CNN

Lewis has a history with the Utah Department of Corrections.

According to Utah DOC records, Lewis’ listed infractions in Utah include a felony burglary charge in 2003 and a tax lien in 2007.

The DOC said Lewis was put on parole supervision here in Utah from Louisiana, where he had a simple robbery offense, in April 2003.

Utah Adult Probation and Parole sent a parole violation notice to Louisiana after Lewis was charged in September 2003 with burglary, he failed to maintain employment and absconded.

Then Utah requested that Louisiana issue a warrant for Lewis’ arrest.

Now, back in Arkansas, the 33-year-old man was arrested Monday.

“Lewis admitted … to kidnapping Beverly Carter, but would not divulge her whereabouts,” the sheriff’s office said.

After he was booked into the Pulaski County Regional Detention Facility, investigators said they obtained information that led them to the property where the grave was located.

Monday night Lewis gave peculiar statements to reporters as he got into a police car.

As police led Lewis, in shackles and dark prison scrubs, to a police car, reporters asked him if he killed Carter.

Twice, he said he didn’t, according to video from CNN affiliates KTHV and KARK.

Asked to explain, Lewis repeats that he “had” a co-defendant and provides a man’s name, “Trevor,” saying he’s in the military.

However, the Pulaski County Sheriff’s Office said Lewis is the sole suspect, according to KFSM.

When questioned about his and the co-defendant’s relationship, he said, “He’s got texts back and forth to me and him and then they wanted my phone.”

“Why Beverly?” a reporter asked.

“She was a rich broker,” Lewis responded.

Beverly Carter went to show a home in Scott, Arkansas Thursday, Sept. 25, 2014. Then, she vanished. Sunday, a court issued an arrest warrant for Aaron M. Lewis, 33, in her disappearance. – CNN

When asked if he had anything to say to Carter’s family, he twice said, “Sorry.”

As officers placed Lewis in the backseat of a squad car, a reporter asks again, “Why Beverly?”

“Because she was just a woman who worked alone, a rich broker,” he said.

As the car door is closed, Lewis was asked one more time if he killed Carter, and again, he replied, “No.”

Carter vanished last week when she went to show a home in the small community of Scott.

Police haven’t said how they linked Lewis to Carter or how they tracked him down but they say Lewis left a hospital Sunday without notifying police while he was a person of interest in her disappearance.

Suspect was in wreck

Lewis, who was on parole, was in a traffic accident Sunday, and police arrived to find his automobile on top of a concrete culvert, according to an accident report from the sheriff’s office.

Lewis told police that a vehicle, which he couldn’t describe, had run him off the road. But a witness told police that he was behind Lewis before the accident, and “Lewis was traveling at a high rate of speed prior to the crash,” the report says.

Another witness told police that “the Lewis vehicle was going ‘so fast’ prior to the curve and she further stated that she observed the Lewis vehicle ‘fishtail’ around the curve, going into the ditch,” according to the report.

Paramedics took Lewis to Baptist Health Medical Center in Little Rock. A deputy followed the ambulance to the hospital to issue Lewis a citation for careless driving as well as not wearing his seat belt, because there was evidence Lewis hit the windshield during the crash, the report says.

At that time, Lewis was a person of interest in the Carter investigation, but he was not under arrest, Lt. Carl Minden said.

Realtor Beverly Carter went to show a home in Scott, Arkansas on Thursday, Sept. 25, 2014. Then, she vanished. On Sunday, a court issued an arrest warrant for Arron M. Lewis (shown), 33, in her disappearance. He was arrested Monday in Little Rock, Arkansas. – CNN

“While at the hospital and undergoing tests, Mr. Lewis left the hospital. He was not under the guard of law enforcement at that time due to not having any criminal charges at that point,” the lieutenant said in a statement.

The warrant charging him with kidnapping was issued later Sunday, he said.

The mysterious disappearance of the 49-year-old resonated among fellow real estate agents, who posted their fears on a Facebook page set up for sharing information about her case.

Carter’s last phone call to her husband came Thursday afternoon, telling him the address where she would be.

When hours went by with no further word from her, Carl Carter says he “knew something was wrong.”

Before calling authorities, Carl Carter went to the address of the home Beverly Carter was showing and saw her brown Cadillac parked there, the sheriff’s office said.

Noticing the property was open, the husband entered and searched for his wife without success, according to the Sheriff’s Office.

There was activity on Carter’s cell phone after she disappeared, Minden said.

Later he explained to HLN’s Nancy Grace that activity included text messages but he declined to elaborate on the nature of the texts.

According to her employer’s website, Beverly Carter was married for 34 years and has four grandchildren.

“I feel like I’m in a fog, or a horrible nightmare from which I can’t awaken,” Beverly Carter’s son, also named Carl, wrote on a Facebook post before his mother’s body was found.

A Facebook page set up about Carter’s disappearance was followed by more than 28,000 people as of Monday afternoon.

In addition to any charges he may face in Carter’s disappearance and death, he has a criminal history in northwest Arkansas that includes felony theft of property, obstruction of government operations, failure to appear and unlawful removal of a theft device, Minden said in a statement.

He’s also faced charges from the Kansas City police and the Utah Department of Corrections, he said.