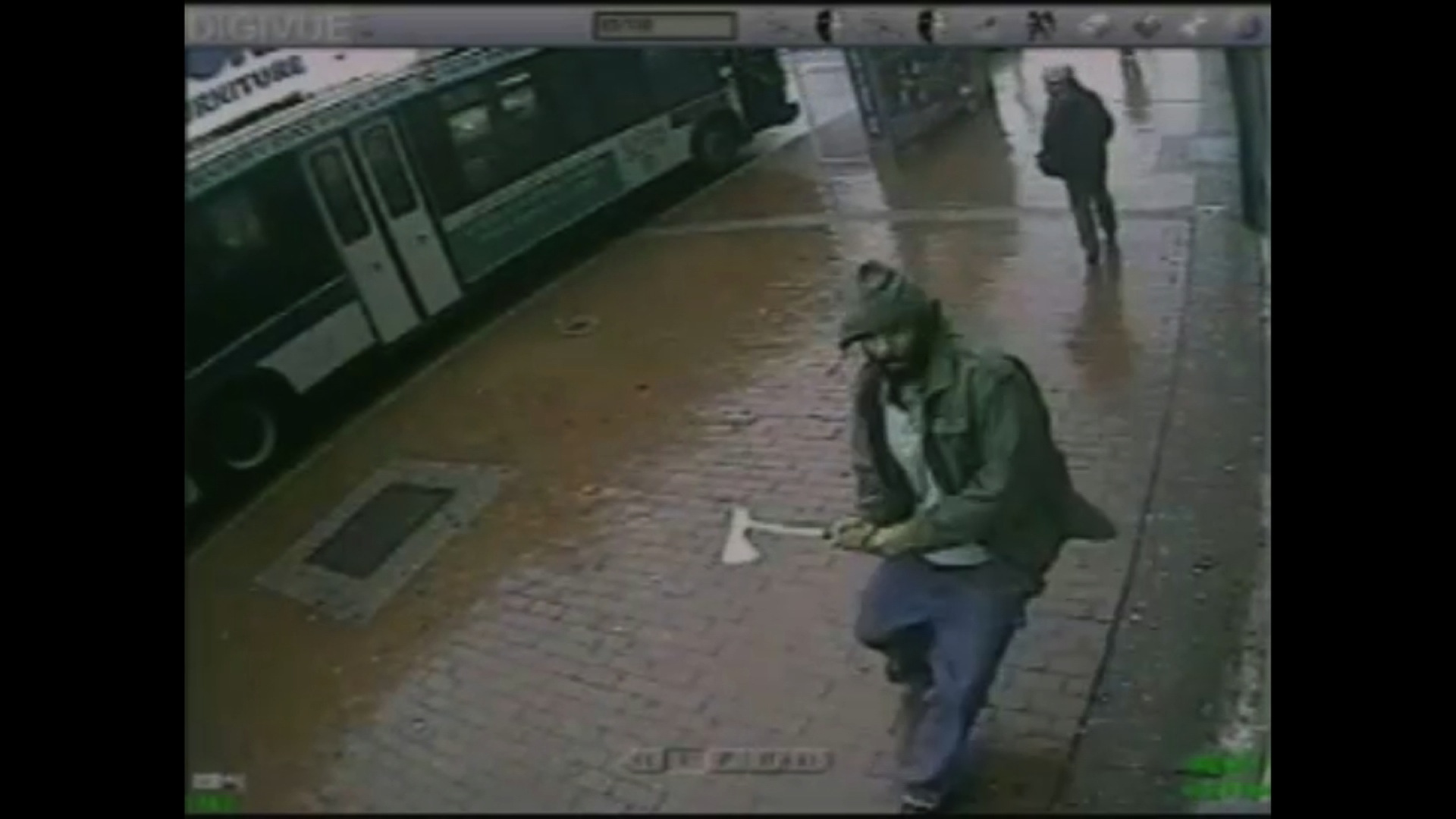 By Shimon Procupez and Greg Botelho

NEW YORK (CNN) — A man charged at four New York police officers with a metal hatchet Thursday, hitting two of them at a time of high alert for authorities concerned they might be targeted in the United States and Canada.

The suspect was hiding behind a bus shelter as if he was waiting to attack the officers, according to a law enforcement official, who said it almost appeared as if he was stalking them. The officers were posing for a photo when the man pounced, police Commissioner Bill Bratton said.

He struck one officer in the right arm and another in the head, according to the commissioner. The two officers who weren’t hit then shot at and killed the attacker.

The law enforcement official identified the suspect as Zale H. Thompson, who had a criminal record in California and had been discharged from the Navy for misconduct, according to the source.

A 29-year-old bystander who was struck by a bullet in the lower back was also taken to a hospital. Her condition was not known.

Authorities are looking to see if the unprovoked attack, in the New York borough of Queens, is tied to recent calls by radicals to attack military and police officers, law enforcement officials say.

Asked about a possible connection to terrorism, Bratton said, “There is nothing we know as of this time that would indicate that were the case. I think certainly the heightened concern is relative to that type of assault based on what just happened in Canada.”

On Wednesday, Cpl. Nathan Cirillo was shot and killed as he stood guard at Canada’s National War Memorial before shots erupted in the halls of the country’s Parliament minutes later.

The Ottawa gunman had “connections” to jihadists in Canada who shared a radical Islamist ideology, including at least one who went overseas to fight in Syria, multiple U.S. sources told CNN on Thursday.

And on Monday, another Canadian soldier — this one in Quebec — was run over and killed by another man who the Royal Canadian Mounted Police’s Martine Fontaine said had been “radicalized.”

It’s not the only city so affected. Washington’s Metropolitan Police Department has also “increased security levels and visibility, so the public should expect to see an enhanced presence of officers in light of the Canada and New York attacks, spokeswoman Gwendolyn Crump told CNN.