Agents: Man says devil made him do it; 10 Commandments smashed by car 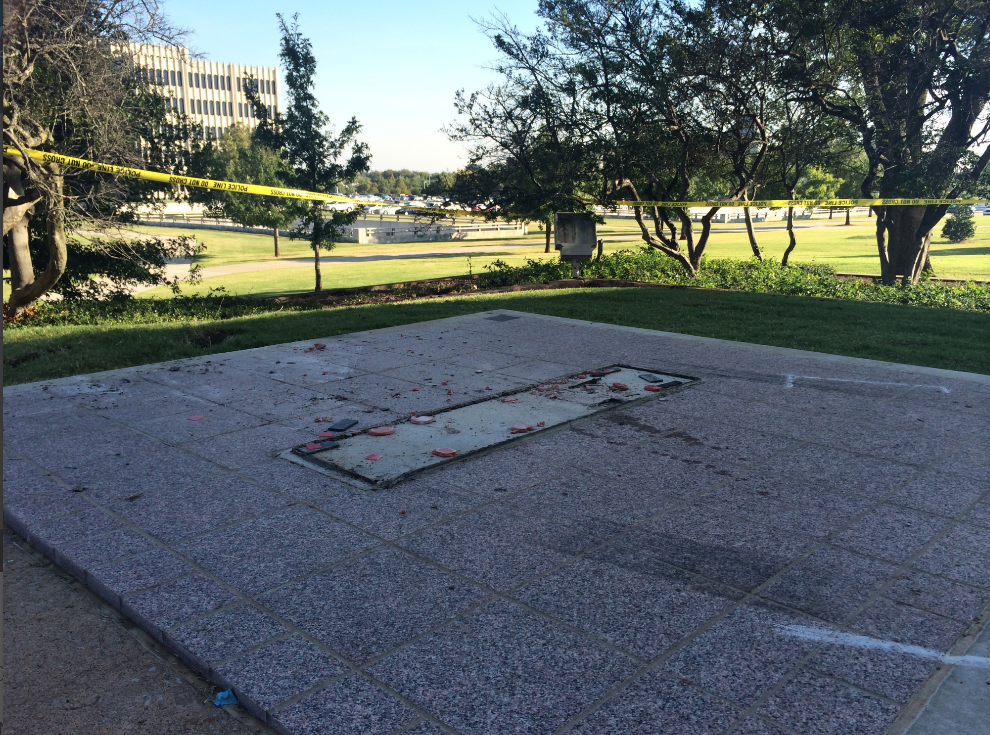 The images in the gallery above are courtesy FOX 13 News sister station KFOR-TV in Oklahoma.

(CNN) — Though he told authorities that the devil made him do it, Satanists disapproved, after a man allegedly shattered a stone copy of the Ten Commandments last week.

The man is accused of running his car on Friday into a controversial 6-foot-tall granite tablet of the biblical edicts erected near Oklahoma City’s Capitol, CNN affiliate KFOR reported.

He then left his car standing near the monument, which — as photos showed — was smashed asunder through the second commandment: “Thou shalt not take the Name of the Lord thy God in vain.”

He walked into the Federal Building, where he made threats against President Obama and the federal government, KFOR reported, citing U.S. Secret Service agents.

The man told the agents that the devil made him wreck the religious monument, which was placed at the Capitol in late 2012.

He also said he was mentally ill and had stopped taking his medication. He has been detained at a mental health facility for evaluation.

Condemnation of the destruction came quickly from two sources that have railed against the monument — the ACLU of Oklahoma and the Satanic Temple.

The ACLU filed suit last year against the presence of the monument on state property, and on Friday, said that it would keep fighting for its removal, because it feels it it violates the Constitution.

But the organization was also “outraged at this apparent act of vandalism.”

“The Ten Commandments constitute a strong foundation in our clients’ deeply held religious beliefs,” the Oklahoma ACLU said in a statement.

The Satanic Temple has demanded to have a monument of its own erected next to the Judeo-Christian one.

And it still wants it, but “only alongside the 10 Commandments,” it said in a statement posted by KFOR.

“If our monument stands at the state Capitol, we want it to complement and contrast the Ten Commandments, with both standing unmolested as a testament to American religious freedom and tolerance.”

The Satanists could well have that wish fulfilled, but only in part.

Oklahoma Gov. Mary Fallin has vowed to have the Ten Commandments monument rebuilt.

Click here to visit KFOR-TV for updates and local coverage of this story.