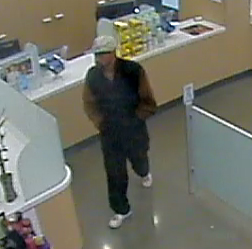 The first robbery took place on Friday at a Walgreens located at 1208 Washington Blvd. at 10:20 p.m. The second was reported Sunday at 5:10 p.m. in the South Ogden Neighborhood Walmart, 1710 S. Skyline Drive.

During the Walgreen’s robbery, Ogden police say, the suspect approached the pharmacist and verbally demanded narcotics and money – threats were made.

The suspect left through the main doors of the business. Police say the suspect should be considered dangerous.

The suspect involved in both robberies is described as possibly Hispanic, approximately 140-150 pounds and 5 feet 8-11 inches tall.

Anyone with information on the robberies or the whereabouts of suspect is asked to call Ogden or South Ogden police at 801-629-8221.