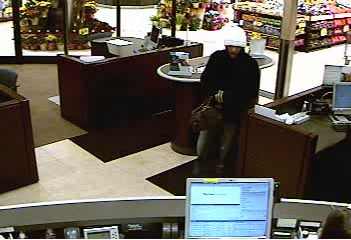 MILLCREEK, Utah – Police are searching for a man who dressed as a woman to disguise himself during a bank robbery in Millcreek Thursday night, and officials said the suspect should be considered armed and dangerous.

Officials with the Unified Police Department stated the robbery occurred at a Chase Bank located inside a Smith’s at 3215 South Valley St. around 6 p.m. Thursday.

Officials said the suspect is a male who disguised himself as a female. The man approached the counter and brandished a black, semi-automatic handgun while demanding money.

The suspect fled on foot after receiving an undisclosed amount of cash, but he may have been driving a maroon Honda Accord.

The suspect is described as being a Caucasian male in his mid-20s who stands about 5-feet 8-inches tall and weighs 135 pounds.

The man was wearing a black wig, lipstick, other makeup, and a white “beanie” style hat. He was wearing black and white gloves, women’s jeans and a dark-colored coat and was carrying a purse. The suspect is pictured above, and officials said he should be considered armed and dangerous.

Anyone who recognizes the suspect or who has knowledge regarding his whereabouts is asked to call police at 385-468-9818.