Snow storms kill 5 as frigid temperatures hammer half of U.S. 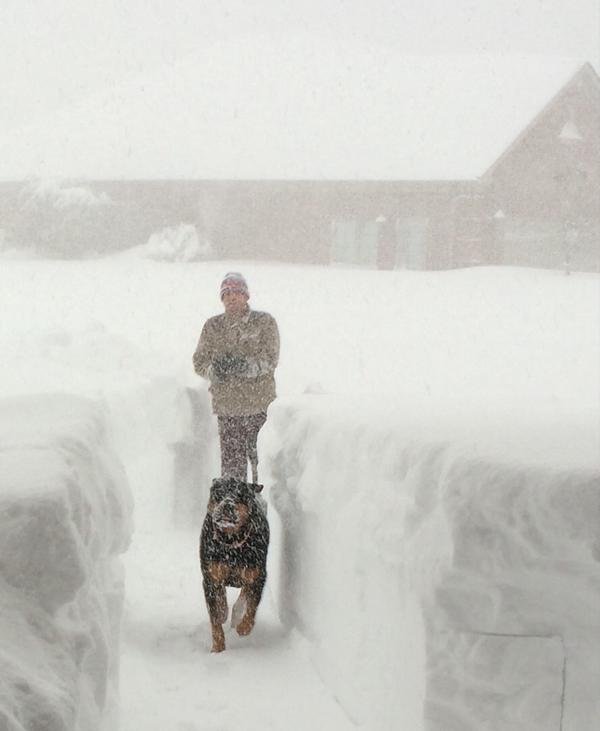 BUFFALO, NY – Snowstorms and record low temperatures whacked much of the country this week and there’s more havoc coming Wednesday.

About 50 percent of the country had snow on the ground Tuesday, according to the National Weather Service.

Buffalo, New York, one of the hardest-hit areas, is buried under 6 feet of snow — and counting.

“This storm is basically a knife that went right through the heart of Erie County,” said Mark Poloncarz, Erie County executive. “I can’t remember and I don’t think anyone else can remember this much snow falling in this short a period.”

The city’s Mercy Hospital is short-staffed because many employees couldn’t travel.

“Many of our nurses couldn’t get in to work today,” nurse Shanel Orsi told The Buffalo News. She herself hitched a ride from a snowmobiler to get to work.

Thankfully, there were relatively few power outages in and near Buffalo, where about 450 customers didn’t have electricity Wednesday morning, New York State Electric and Gas Corp. reported. That’s less than 1% of its customers.

Another blast of cold air will hammer the Midwest and Northeast on Wednesday while the Southeast could see record lows as temperatures drop into the teens and 20s.

At least five people have died as a result of the storm. One of the storm-related deaths was from a car accident. Three other people died due to cardiac issues that resulted from shoveling snow, Erie County officials said. And in Alden, New York, a 46-year-old man was found dead inside a car buried in 12 to 15 feet of snow, authorities said.

Some places in the region have seen more than 5 feet of snow, while others could see 7½ feet more after another round of wintry weather hits this week.

That’s the equivalent of a year’s worth of snow that’s expected to pound some areas over a three-day period, Poloncarz said.

“It’s probably heavier than anything that we have seen in over 40 years, so it’s going to take some time to dig out,” Buffalo Mayor Byron Brown said.

Trapped at the police station

The snow left people stranded in cars and turned roadways into parking lots. It also forced residents to seek shelter in unusual places.

About 20 people took refuge at a fire station and 20 others holed up in a police station Tuesday night, authorities said.

And as they waited, those at the fire station got a teeny weeny gift.

A baby girl was delivered there when an ambulance was unable to take her mother to the hospital, Buffalo Fire Commissioner Garnell Whitfield said.

“She was born, she’s safe and she’s healthy,” Whitfield said.

South Buffalo firefighters battled the snow to reach people who had called for help, and emergency responders responding to some calls only found cars abandoned in snow drifts, The Buffalo News reported. Some crews carried stretchers along snow-choked streets because ambulances couldn’t drive through, Whitfield told the newspaper.

Trapped for over a day

New York State troopers rescued the Niagara University women’s basketball team early Wednesday after it got stuck on a bus for more than 24 hours due to the snowstorm.

The team sat on the side of a highway, unable to move, for more than 24 hours. The bus was bringing the team home from a game in Pittsburgh when it got stuck.

In a Skype interview with CNN’s Don Lemon before the rescue, the coach explained how they got trapped.

“The roads weren’t plowed. It got really bad really fast,” Faustin said. “I’m assuming that somebody in the front of the line got stuck and everybody else had to stop, and that’s how we got where we are.”

For hours, she said, the snow was coming down so hard that they couldn’t see anything surrounding the bus.

All 50 states registered temperatures below freezing Tuesday morning, even traditionally warm ones. Temperatures at Mauna Kea on Hawaii’s Big Island dipped to 31 degrees while Florida’s Panhandle was in the upper 20s, with freeze warnings in effect.

The cause of this mayhem: Arctic air pouring over the relatively warm Great Lakes is producing extreme lake-effect snows.

Lancaster, New York, has already received over 40 inches of snow, and it continues to snow at a rate of 4 to 5 inches per hour.

Tuesday was the coldest November morning since 1976, according to meteorologist Ryan Maue of WeatherBELL Analytics. The average overnight low for the Lower 48 states was 19.4 degrees Fahrenheit.

That’s unusual for this time of year, and is much more reminiscent of a pattern forecasters would expect to see in January or February.

In Erie County, a travel ban is in effect for at least 25 communities. Only emergency vehicles are allowed to travel.

This is only the first band of heavy snow in the Buffalo region. More snow is expected on Wednesday and Thursday, and the snowfall could rank high in the history of lake-effect snow events.