Photos: Ferguson is city on fire after grand jury decision not to indict officer

And more than a dozen buildings, including stores owned by local residents, had been set ablaze.

“This ain’t Iraq. This is the United States,” Demetric Whitlock yelled to a line of police officers on South Florissant Road, in front of the Ferguson Police Department.

When a grand jury decided Monday not to indict Ferguson police Officer Darren Wilson in the August shooting death of 18-year-old Michael Brown, the news triggered fresh confrontations between protesters and police in the tense Missouri city.

While most of the demonstrators peacefully protested on the streets, some smashed the windows of a police cruiser and set another on fire.

An entire row of businesses on West Florissant Avenue, a major thoroughfare, was engulfed in flames. There were so many infernos that firefighters couldn’t rush to every one.

Amid the looting and arson, some protesters demanded the media stop reporting on the events. CNN’s Sara Sidner was struck in the head with a rock.

Many business owners will return to their shops to see their livelihoods in ruins. Looters broke into a beauty supply store and stole hair weaves and wigs, leaving the heads of mannequins strewn in the middle of the street.

And in nearby Dellwood, some people torched a row of cars at a car dealership and set several businesses on fire.

“The fire district does not feel safe coming out to put out fires because of the gunshots and the looting there taking place,” Dellwood Mayor Reggie Jones said. “So they are refusing, basically, to come out and put these fires out.”

But Belmar said he heard at least 100 gunshots go off through the night. Missouri State Highway Patrol Capt. Ron Johnson said police did not fire any of the bullets.

“The Guard is providing security at the Ferguson Police Department, which will allow additional law enforcement officers to protect the public,” Nixon’s office said.

But it’s unclear how long standoffs might continue between protesters and police.

“People here have a real grudge against the police,” Whitlock said. “It’s not going away.”

It wasn’t just that way in Ferguson.

Twelve miles south in St. Louis, Police Chief Sam Dotson said windows of businesses located across the street from a protest gathering spot were smashed and 21 people were arrested on felony accusations, including illicit gun possession. But no one was shot.

“What we saw last night is the criminals were using the cover of the organized protests to do their criminal activity,” Dotson said.

News about the grand jury’s decision not to indict Wilson also spread quickly nationwide, spurring others to turn out for spontaneous rallies in support of Brown’s family against what they characterized as unnecessary force by some police officers against citizens, especially African-Americans.

Some laid down on the street outside the White House in protest. In New York’s Union Square, scores held up a huge, lit-up sign that read, “Black lives matter.” More protesters took their message to the streets of Seattle, Washington, and Oakland, California.

Others will get their chance to express their views at more than 120 pro-Brown family vigils and gatherings in cities big and small — from Los Angeles to Bangor, Maine — organized nationwide, including some scheduled for Tuesday.

There is the chance that, in Ferguson or any of those places, violence could again flare between protesters and police.

Weighing in during a live address Monday night, President Barack Obama called it “understandable” that some Americans will agree and others will be made angry by the decision to not indict Wilson. Whatever their take, he said, lashing out is not an acceptable reaction.

“First and foremost, we are a nation built on the rule of law, so we need to accept this decision was the grand jury’s to make,” Obama said. 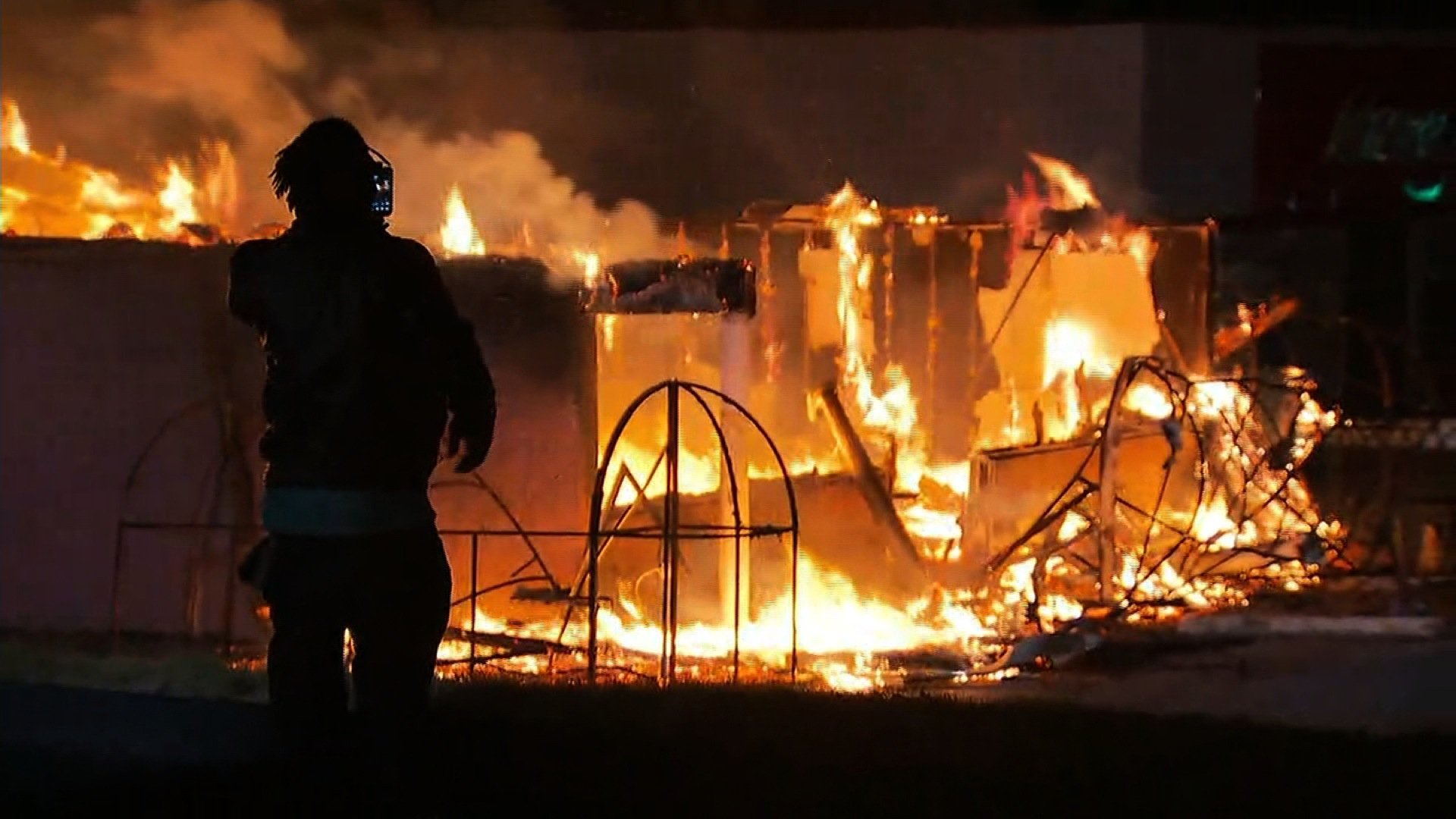 All of this unrest, all of this tension dates to August 9, when Brown and a friend were walking down the middle of a Ferguson street.

What happened next — from the shooting, to the failure to immediately charge Wilson in Brown’s death, to at-times violent clashes between authorities and Brown family supporters — turned Ferguson from a largely unknown St. Louis suburb to the center of a national debate over race, law enforcement and the interaction of the two.

The basic facts have never been disputed. Brown, who was black, was unarmed. Wilson, who is white, shot him.

But how and why that exactly happened is hotly disputed. And grand jury testimony released late Monday offered little resolution, with Wilson’s version of events contradicting those offered by some witnesses.

The St. Louis County grand jury of nine white and three black members got a lot of information — meeting 25 times, during which they heard from 60 witnesses and three medical examiners in 70 hours of testimony.

The grand jurors’ mission was never to convict Wilson. Rather, it was to decide whether there was reason enough to charge him with a crime — either first-degree murder, second-degree murder, voluntary manslaughter and involuntary manslaughter. They also could have added a charge of armed criminal action. If at least nine of the 12 grand jurors had voted that there was enough to proceed with charges, Wilson would have stood trial.

After hearing all of the testimony and deliberating for two days, they decided not to indict the officer on any charge.

Said St. Louis County Prosecuting Attorney Robert McCulloch: “The physical and scientific evidence examined by the grand jury, combined with the witness statements, supported and substantiated by that physical evidence, tells the accurate and tragic story of what happened.”

The decision was welcomed by Wilson, who — in a statement issued by his attorneys — expressed thanks to those who have “stood by his side.”

The decision not to indict Wilson “devastated” the late teenager’s father. His mother ran down the street, tears streaming down her face.

They still want something positive to come from their nightmare. But in a statement, the family stressed that one thing it did not want is violence.

“While we understand that many others share our pain, we ask that you channel your frustration in ways that will make a positive change,” the family said. “We need to work together to fix the system that allowed this to happen.”

The family made a call for police officers across the country to wear body cameras.

So what happens next?

The U.S. Justice Department is conducting two civil rights investigations in the case: one into whether Wilson violated Brown’s civil rights, and another into the police department’s overall track record with minorities.

The investigations will likely require lots of time, if similar past cases are any indication.

Back in Ferguson, residents worried about the toll Monday night’s violence has taken on the quaint revitalized downtown.

One of the casualties was Ferguson Optical. Earlier in the day, manager Tim Marrah had put out the sign he has been displaying since August: “We are family.”

It was no protection against vandals. A storefront window was shattered and left barely standing.

Peaceful protesters were shocked by the violence that has marred the city.

“This is crazy. I mean, this doesn’t do anything,” one resident told CNN.

She worried about how victims would pick up the pieces.

“They’re not going to rebuild. It’s just going to be a ghost town pretty soon.”