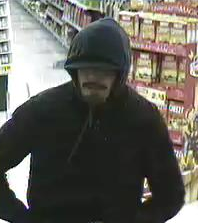 MILLCREEK TOWNSHIP, Utah — The Unified Police Department has released a series of photos that show the suspect in an armed robbery at a bank in Millcreek Township earlier this month.

Police are still looking for the man who robbed a Wells Fargo Bank branch inside a Fresh Market grocery store on December 23.  According to a press release, the suspect approached a teller, brandished a black handgun and demanded money.

At one point during the robbery, the suspect pointed the gun at the teller, the press release said.

The teller complied with the suspect’s demands and the suspect fled on foot. No vehicle was seen and no one was injured.

UPD’s initial attempts to locate the suspect were unsuccessful, so police hope a member of the public will recognize him from the photos they provided.

Police are looking for a Caucasian male in his late 20s, 180 pounds and blue eyes. and a dark mustache. He was wearing black gloves, blue jeans, a dark blue hoodie and a dark baseball cap. Police said the suspect’s mustache and goatee appear to be fake.

The suspect should be considered armed and dangerous.