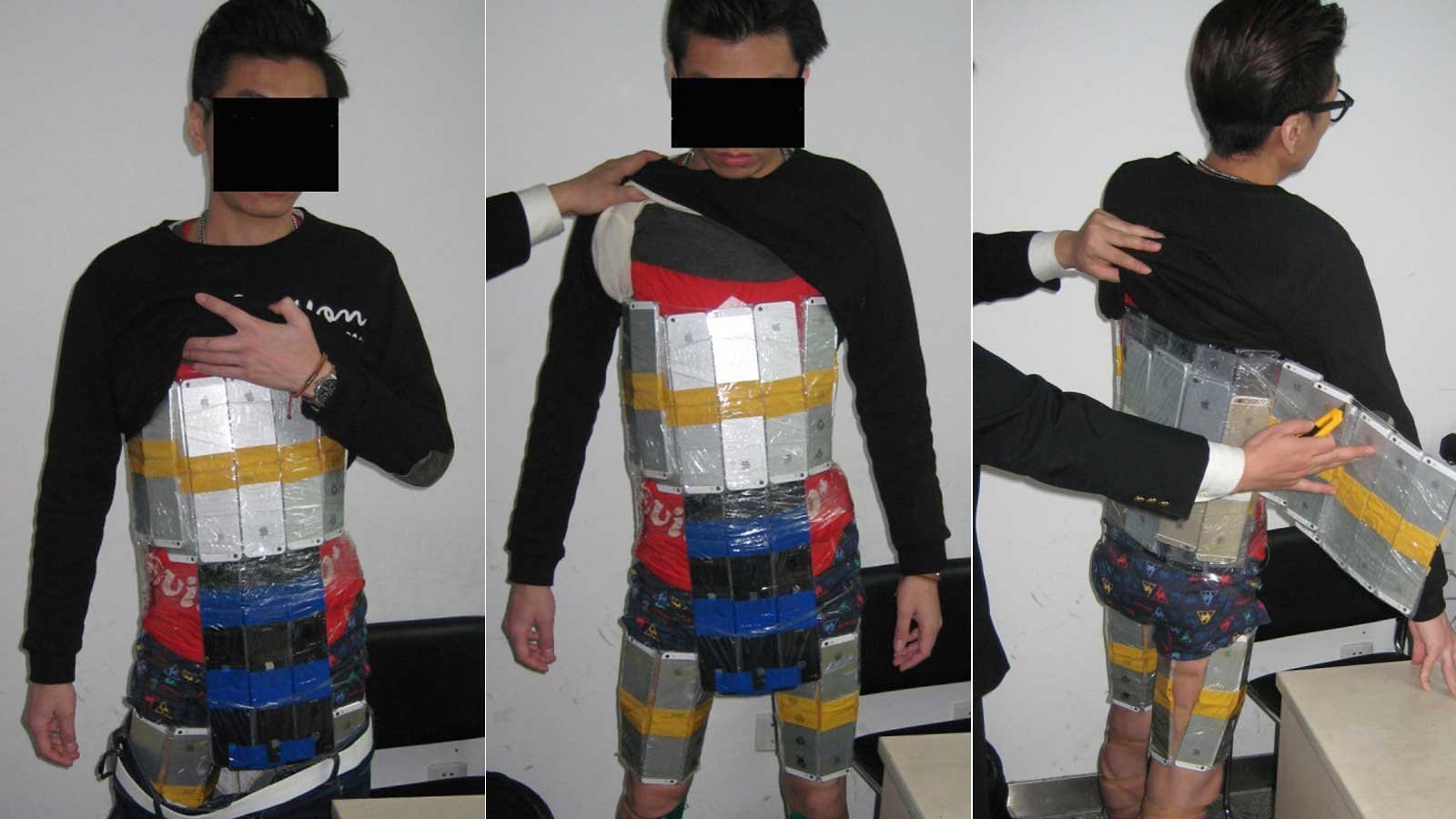 BEIJING – When it comes to smuggling, not all mules are created equal.

Chinese customs officials on Sunday busted a Hong Kong man trying to sneak 94 iPhones into the mainland, by strapping them on his body.

Customs officers in Shenzhen, China detained a Hong Kong man trying to smuggle 94 iPhones into Mainland China from Hong Kong Monday, Jan. 12, 2015. The unidentified man had the phones worth $49,000 taped to his body, police said.

The man caught the attention of inspectors at the Futian crossing in Shenzhen, a southern Chinese metropolis bordering Hong Kong, when he walked like someone carrying a heavy load despite appearing to travel light, customs officials told CNN on Tuesday.

After finding nothing suspicious in his two plastic shopping bags, officials asked the man to pass through a metal detector and the alarm went off.

Officials discovered both the iPhone 6 and iPhone 5S models and estimated the total value of the devices to exceed 300,000 yuan ($49,000).

The man, whose record revealed numerous previous run-ins with customs regulations, was held for further questioning.

Customs officers in Shenzhen, China detained a Hong Kong man trying to smuggle 94 iPhones into Mainland China from Hong Kong Monday, Jan. 12, 2015. The unidentified man had the phones worth $49,000 taped to his body, police said.

In October, it took just six hours for customers of the country’s three mobile carriers to reserve one million units of the iPhone 6 and iPhone 6 Plus ahead of their official launch.

Apple handsets are more expensive in the mainland than Hong Kong, however, due to higher import taxes.

An iPhone 6 with 64 gigabytes of storage, for instance, sells for almost $1,000 in the mainland but only about $820 in Hong Kong and the price difference has created a huge and lucrative black market supplied by smugglers.

Shenzhen customs officials disclosed that they have caught 18 mules strapping smuggled electronic products, including 282 iPhones, on their bodies since December.

For the Hong Kong mule caught on Sunday, he may have lost his 94 iPhones, but likely made the record books.

By: Steven Jiang for CNN