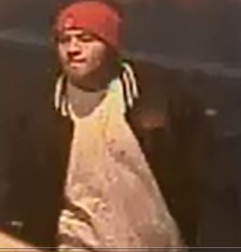 SALT LAKE CITY — Unified Police Department officers are looking for two armed robbery suspects who are accused of robbing the same smoke shop twice in less than one week, and police released images of the suspects that were captured by surveillance equipment the store installed in response to the first robbery.

Police said the men robbed the Shop N Save at 970 East 3300 South on Friday, and then again Wednesday night. In both instances, one suspect brandished a handgun while the other suspect demanded money and cigarettes from the clerk.

The clerks complied in both cases, and the suspects fled on foot. Both suspects are described as Hispanic men in their 20s who stand about 6-feet tall and weigh about 200 pounds. Both men have short black hair. One suspect has a tattoo on the right side of his face, near his eye. The men are pictured above.

According to the Unified Police Department, after the first robbery the shop obtained surveillance equipment. That equipment captured images of the suspects during the second robbery.

Anyone who recognizes the men is encouraged to contact police by calling 385-468-9818.