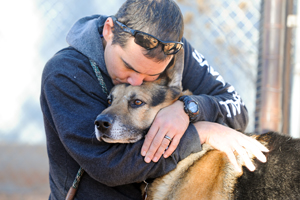 KANAB, Utah -- After the death of its owner, a German Shepherd named Bela was driven across the country in December to spend the rest of its days in Kanab at the Best Friends Animal Society.

The dog was not in Utah long when it was discovered Bela was suffering from a fast-growing cancer.  He was euthanized over the weekend.

Bela's journey to the Beehive state started with an Indiana woman's dying wish for her dog to be buried with her.The woman said the dog could be sent to a Utah animal shelter as an alternative.

Thanks to donations, Bela arrived at Best Friends Animal Society in Kanab at the end of December.

However, Sunday, less than a month later, Bela had to be put down.

"The Best Friends family suffered a very sad and entirely unexpected loss over the weekend. On Sunday morning, we had to say goodbye to the magnificent German shepherd, Bela, who captured our hearts over the holidays. ...On Sunday morning Bela’s caregiver noticed that his abdomen was distended and he was breathing rapidly, so he was brought to the Best Friends clinic for an emergency checkup."

According to the post, tests showed fluid in Bela's abdomen and nodules in his lungs.

The medical director diagnosed Bela with a "very fast-growing cancer and there was very little likelihood he would have lasted more than a very stressful day or so."

They are now honoring the last wishes of Bela's original owner.

Bela is being cremated and his ashes will be sent to Indiana to be buried with his owner who died in November.

"Bela was a great dog who made many friends and was quickly becoming one of the most popular dogs at the Sanctuary. Our staff had grown to love him as the sweet and wonderful dog he was and every one of us who knew him is devastated by this turn of events. Bela will be greatly missed."

Woman’s will states her dog should be killed, buried with her… or sent to Utah shelter

After campaign to #SaveBela, dog arrives at sanctuary in Utah