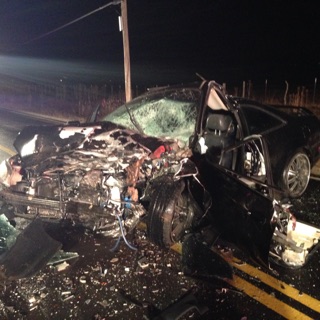 EDEN, Utah — A man killed in a head-on collision in Ogden Canyon Sunday morning has been identified.

At approximately 1:12 a.m., Leland Joseph Ogg, 35, of South Ogden, was traveling west on 1900 North in Eden in a Honda Accord when for an unknown reason he crossed into oncoming traffic colliding head on with a Huntsville woman driving a Ford Ranger, according a press release from Weber County Sheriff’s Office.

Ogg was transported to McKay Dee Hospital where he later died.

The woman, 18, was pinned in her vehicle, required extrication, officials say. The teen was taken McKay Dee Hospital and is being treated for a broken leg and other non-life threatening injuries.

A search warrant was obtained for the South Ogden man’s blood, which is a standard procedure, according to the release. The other driver voluntarily provided a blood sample.

It is unknown why Ogg’s vehicle veered into oncoming traffic at this time. The accident is still under investigation.