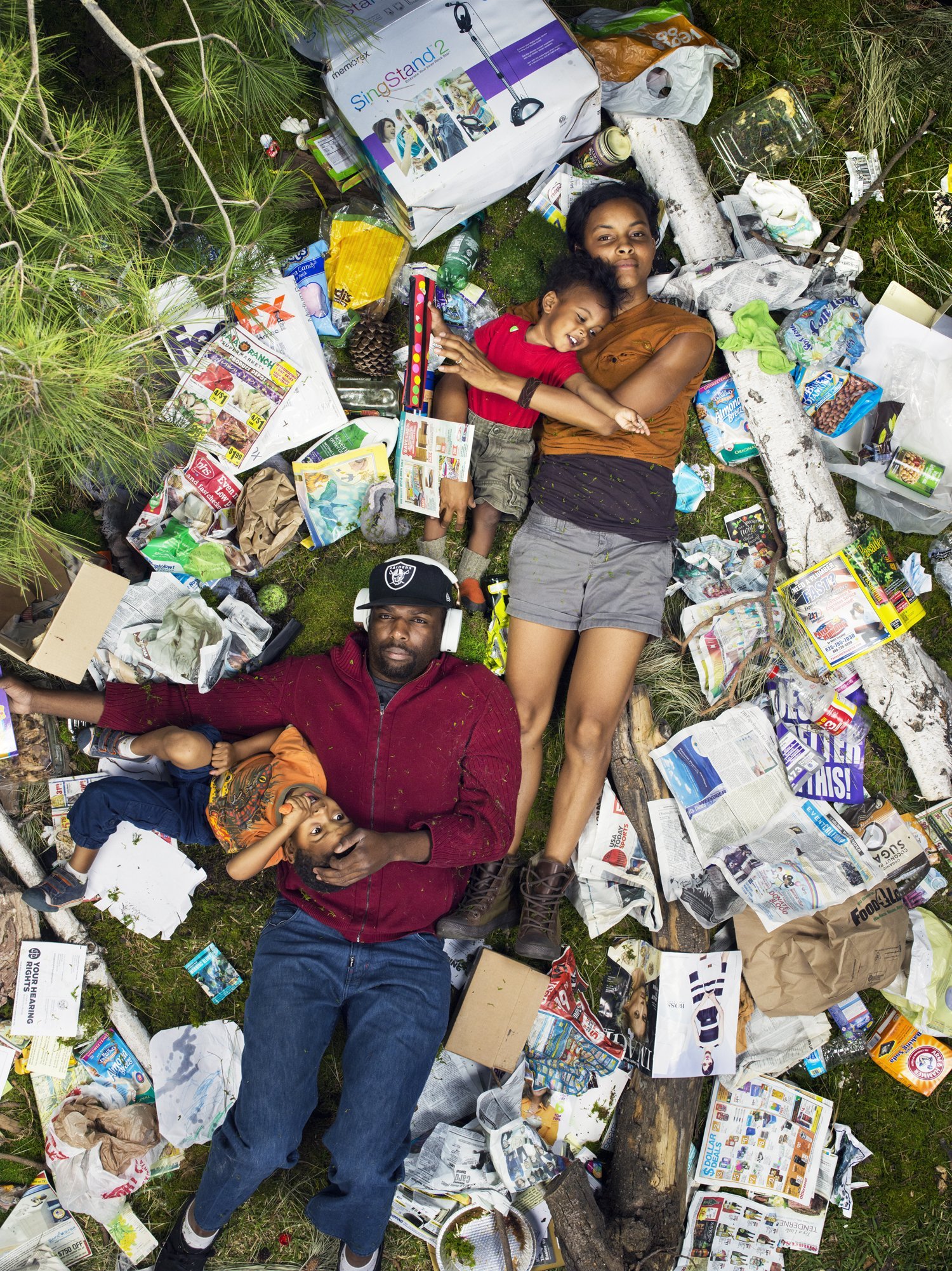 (CNN) — A picture is worth a thousand words, but a California-based photographer turned a picture into a reality check.

Award-winning photographer Gregg Segal decided it was high time Americans had a visual of their waste production, so he decided to snap pictures of people in seven days of their own trash in a series titled: “7 Days of Garbage.” The photos went viral.

“I wanted to make a picture that made it impossible to ignore,” said Segal.

According to the EPA in 2012, Americans generated about 251 million tons of trash. This amounts to a quarter of the world’s waste, despite the U.S. holding less than 5% of the world’s population.

“We tend not to notice the problem because it is too big, it’s overwhelming,” said Segal.

That is why in January of 2014, he set out to take pictures of people in their trash. Somehow, Segal managed to convince over 20 families, couples and individuals to do it.

“I wanted to use natural environments to suggest that there is no untouched pristine place,” said Segal.

For Segal, variety in subjects and settings was very important for this series of photos.

“This is a problem that affects everyone. None of us is really exempt. We are all in this together, it’s a universal problem so you should have a universal representation.”

Segal admits, some of his subjects needed a little extra motivation — like money — to do the shoot.

“There was a range of responses and depending on the level of a person’s sophistication and ecological awareness or greenness,” he said.

For most, the shoot served as a reality check, as many didn’t realize they produced so much trash. Some even filtered their trash before they showed up for the shoot because of embarrassment.

“A lot of people weren’t faithful to the request and they did not bring a lot of their garbage,” said Segal.

“There is definitely shaming involved and as a culture we don’t like to be shamed.”

“It’s like when a dog pisses on the carpet, and you put their nose in it and say no don’t do that,” said Segal.

One particular photo stood out. It featured a wardrobe stylist donning a tailored suit, and his wife sporting a pricey pair of Christian Louboutin pumps. This all in trash.

Annie Chow, who did the shoot with her husband and two children, considered herself a pretty eco-conscious person. After doing the shoot, she couldn’t believe how much more recycling she needed to do.

“A lot of the trash I was embarrassed to show, because I didn’t realize how many recyclables we had,” said Chow.

“It made me realize I needed to shop more at the farmers market, consume less things and buy less plastic” said Chow.

Segal wasn’t surprised by the impact the shoot had on participants.

“A lot of people liked the teaching moment involved. Especially, the ones with children,” said Segal.

This is not the first time Segal has tackled environmental pollution in his work. In 2008, in a series called “Detritus,” Segal photographed a figure of a man made of garbage traveling around the world.

“A lot of things I do have a social value,” said Segal.

“It expose us to ourselves, to see ourselves in a light that we hadn’t considered previously.”