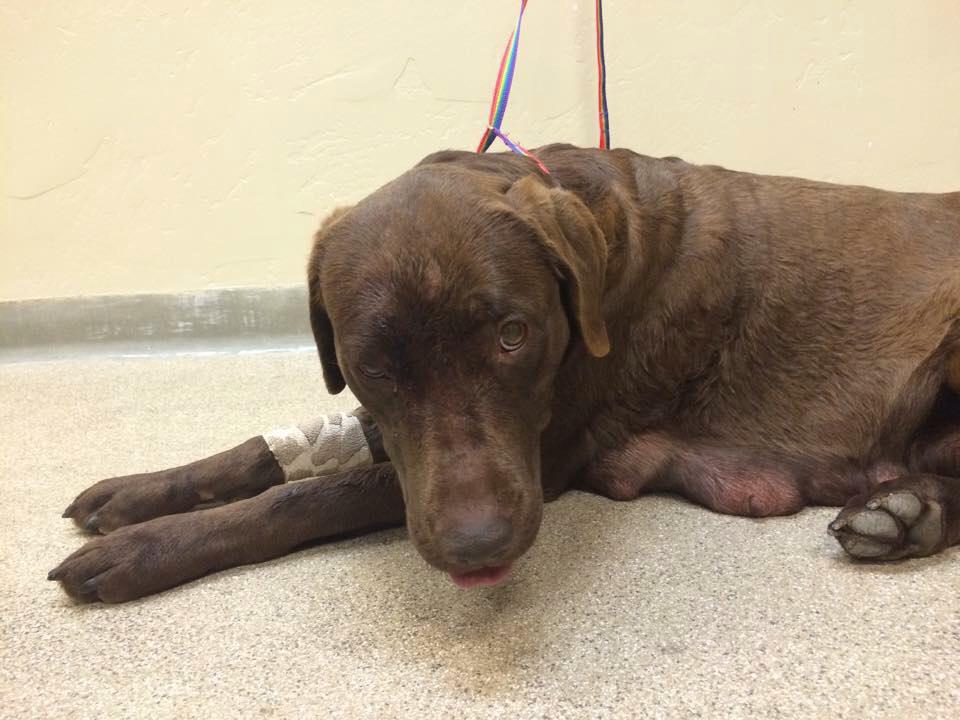 EPHRAIM, Utah – Animal advocates are looking for the person responsible after a dog that recently gave birth to a litter of puppies was found shot twice in the head and left for dead.

Karma is a 3 to 5-year-old chocolate Labrador who recently gave birth to a litter of puppies, and the dog was found in the foothills of Sanpete County. Rescue Rovers Dog Adoptions and Wag-N-Train Dog Rescue are both looking for information that leads to the arrest and conviction of the person or persons responsible for the act of animal cruelty. Several photos of Karma were posted on Facebook by Rescue Rovers.

The dog was shot in the head twice, according to a press release from the animal groups.

Debbie Welder, Rescue Rovers Dog Adoptions, stated: “This innocent dog did not deserve to be treated like trash and left to die – luckily a passerby found her in time. We are grateful to Wag-N-Train Rescue and Payson Family Pet Hospital for taking immediate action to save Karma’s life.”

Officials with the animal groups said they hope to bring the case to the attention of law enforcement and the public. Jamee Wheelwright, Wag-N-Train Dog Rescue, said the dog suffered serious injuries.

“Karma was rushed into surgery where the vet discovered one bullet had lodged in her skull and was unable to remove it,” Wheelwright stated in the press release. “She will most likely lose all vision in her right eye. The day following surgery Karma had a violent seizure and her temperature spiked very high. After an hour the seizure had stopped and her temperature started coming down. Karma is making progress. She can sit up, and seems to be steady. She can even walk a short way. When she walks, she has a little bit of an odd gait…kind of lists to the right. This may or may not improve. It will take time to tell just how fully she will recover. She may have some permanent issues (her gait, her sight), but she is such a very lucky girl just to be alive, and hopefully the issues won’t prevent her from getting a wonderful forever family.”