VENICE, Calif. — Actor Harrison Ford suffered injuries Wednesday when he crash-landed a propeller-driven plane at a Los  Angeles golf course, according to a report from FOX 13 News Sister Station KTLA.

KTLA-TV reports the plane crashed at Penmar Golf Course in Venice, Calif. shortly before 2:30 p.m. local time and that the sole occupant of the plane was taken to a hospital in fair-to-moderate condition. KTLA later cited a “source close to the family” who said the pilot is actor Harrison Ford. Initial reports stated Ford was transported in critical condition, but fire officials later corrected that info. Ford was conscious and breathing when bystanders responded to the crash to offer help.

KTLA reports that Ian Gregor, a spokesman for the Federal Aviation Administration, said the single-engine plane went down on the golf course west of the airport after taking off. He said he had no further information regarding the crash. KTLA reports airplane records show the aircraft is a Ryan Aeronautical aircraft model ST3KR that was manufactured in 1942. It was registered to MG Aviation Inc. in Camden, Delaware.

Harrison Ford’s publicist, Ina Treciokas, told CNN the actor is expected to make a full recovery. He said in a statement to CNN: “Harrison was flying a WW2 vintage plane today which had engine trouble upon take off. He had no other choice but to make an emergency landing, which he did safely. He was banged up and is in the hospital receiving medical care. The injuries sustained are not life threatening, and he is expected to make a full recovery.” 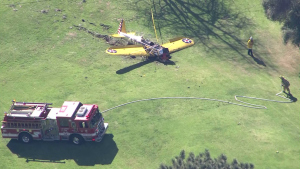