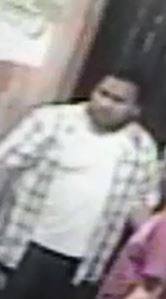 SALT LAKE CITY – Police are asking the public for help identifying a man wanted in connection with an assault that occurred at a club in Taylorsville last month.

According to information from the Unified Police Department, the assault occurred around 1:12 a.m. on March 29 at Club DJ’s, located at 3849 West 5400 South in Taylorsville.

The suspect was with two females who got into an argument. The male victim got in between the two females.

The suspect, who is pictured above, fled the scene. Anyone who knows the identity of the man is asked to contact police at 385-468-9814.