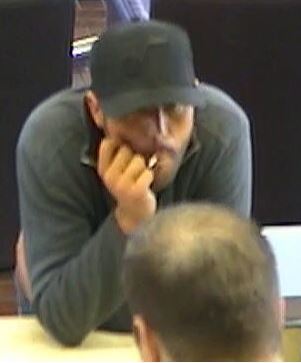 At approximately 5 p.m., the suspect walked into a Zions Bank, 1304 S. Foothill Drive, approached a teller and demanded cash.

“The suspect threatened he had an explosive device, but there was no evidence to indicate that he did,” according to Salt Lake City police.

The teller complied then the suspect fled the bank going south into the Foothill Village shopping center parking lot.

The suspect is described as Caucasian and about 30 years old. He’s described as 6 feet tall, skinny, unshaven and dressed all in black.

Police say he was wearing a baseball cap with a Jazz logo on it.

Anyone with information on the robbery or suspect’s whereabouts is asked to call 801-799-3000.