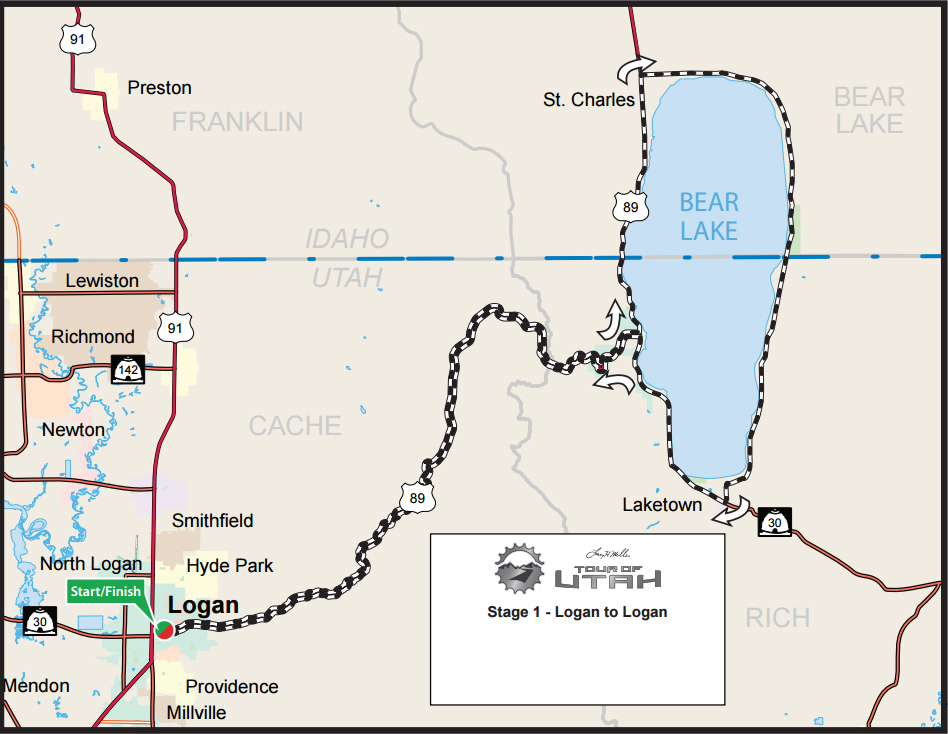 SALT LAKE CITY — Sixteen of the world’s best men’s cycling teams are set to participate in the 2015 Tour of Utah bicycle race this summer.

Participants will cover 712 miles in northern Utah and southern Idaho from August 3-9.  This year’s Tour of Utah will be the second-longest course in the 11-year history of the race.  Riders will pass by 10 ski resorts, through Bear State State Park, Antelope State Park and Wasatch Mountain State Park.

Use the photo gallery of the above to see the courses for each day of the race and visit http://www.tourofutah.com/ for more information.

Stage 1 is the longest opening day in Tour of Utah history at 132 miles. The route will take riders from downtown Logan through Logan Canyon and Garden City, then navigate 48 miles around Bear Lake, known as the “Caribbean of the Rockies” for its turquoise-colored water. The race will roll through Idaho for the first time around the north side of Bear Lake. Returning through Garden City and Logan Canyon, racers will also pass the Beaver Mountain Ski Area a second time on the stage. There will be two circuits in downtown Logan, with the finish along North 100 East and Federal Avenue. Spectators in downtown Logan will be treated to the Women’s Edition: Criterium Classic the same day, which uses the same start/finish area as the men.

Stage 2 presented by Workers Compensation Fund will see the Tour start for the first time in Tremonton. Racers will enjoy the wide, rural roads of Box Elder County, including the famous Fruit Highway (Hwy 89). Rolling along the Wasatch Front through Honeyville, Brigham City, Perry and Willard, the race will then enter Weber County and the city of Ogden. The route heads west through Ogden Canyon and around Pineview Reservoir before returning to Ogden via the North Ogden Divide. Once the race re-enters downtown, spectators will be treated to three laps of a 2.28-mile circuit that will finish on Historic 25th Street across from Ogden Municipal Gardens. It is the first time the Tour of Utah has returned to Ogden for a stage finish since 2012. A similar downtown circuit will be used for the Women’s Edition: Criterium Classic.

Stage 3 presented by Zions Bank visits Davis County for the first time, including a start at Antelope Island State Park. The largest island in the Great Salt Lake, riders will enjoy four miles on the island and cross the seven-mile causeway to the mainland, leaving behind a large wildlife population of antelope, bighorn sheep and more than 600 free-roaming American bison. Racers will encounter familiar roads up the North Ogden Divide and the Eden Valley from the day before, but this time in a clockwise direction. After racing around Pineview Reservoir, the race will head up Trapper’s Loop in the shadow of Snowbasin Resort, a previous venue for the Tour of Utah (2013) and Olympic Winter Games (2002). The race will re-enter Davis County and have two nine-mile circuits in Bountiful, which include a difficult climb on 400 North along the Bountiful Bench. The first-time finish in downtown Bountiful will be on Main Street at Center Street, with the peloton rolling in a northbound direction.

Stage 4 presented by Subaru has a new start/finish at Soldier Hollow in the Heber Valley, site of the 2002 Olympic Winter Games biathlon and Nordic events. The race will head up Daniels Canyon past Strawberry Reservoir and along the undulating terrain in Duchesne County for the first time. Heading through the Uinta National Forest, racers will make an inaugural climb up Wolf Creek Pass this year, descending into Woodland on the way through Midway to Soldier Hollow, which sits in Wasatch Mountain State Park. A long, uphill finish line at Soldier Hollow will give spectators a great location for the exciting finish across from the Day Lodge at Soldier Hollow.

Stage 5 presented by Utah Sports Commission revives the popular Salt Lake City circuit, which returns from 2013 with a twist. Starting on the north side of the Utah State Capital on 500 North, the race will follow the traditional route, passing City Creek Canyon, the Avenues neighborhood and the University of Utah. The race will descend down South Temple and turn right on the steep climb up State Street, then make a new turn on North Temple to 200 West, passing through the Marmalade and Capitol Hill neighborhoods. Things get interesting as the race turns right on 600 North and ascends 20 percent grades up Wall Street and Zane Avenue to the hilltop finish at the Utah Capitol. The race will complete seven laps to make this the hardest 55 miles of the week. Huge crowds are expected to congregate at Reservoir Park, which will host the Lifestyle Expo and will see the race pass on three sides of the park.

Stage 6 presented by University of Utah Health Care continues as the “Queen Stage,” with 12,959 feet of climbing from Salt Lake City to Snowbird Ski and Summer Resort. The 110-mile journey begins at a new start location in front of the historic Rio Grande Depot in downtown Salt Lake City. Riders will roll out passing Pioneer Park, which hosts the Downtown Farmers Market each Saturday from June to October, and take 800 North to Emigration Canyon. The race continues through Morgan and Summit counties on the way to Park City and the brutal climb to Guardsman Pass, followed by the fast descent of Big Cottonwood Canyon to Wasatch Boulevard. For a ninth year, and the second consecutive year starting in Salt Lake City, the Queen Stage will finish with the legendary six-mile climb of Little Cottonwood Canyon to the Snowbird Ski and Summer Resort. This same route will be used earlier in the day for The Ultimate Challenge, an amateur cycling event hosted by the Tour of Utah, University of Utah Health Care and Harmons Grocery.

Stage 7 presented by VLCM/ Barracuda uses the same course that has been used since 2013. The 78-mile race will once again start and finish on Historic Main Street in Park City and include one of the toughest climbs in the world at Empire Pass. This six-mile climb has a gradient that averages 10 percent, with pitches greater than 20 percent. Last year, the race saw former world champion and Tour de France champion Cadel Evans (Australia) of BMC Racing Team use his superior descending skills to catch and pass the lead group on the Mine Road, with speeds exceeding 60 miles per hour, to take his second stage win of the week in Park City. American Tom Danielson of Can nondale-Garmin took the overall title for a second consecutive year on Stage 7.