PROVO — A teenage girl charged in connection with the murder of a Utah County Sheriff’s sergeant went on trial Wednesday, with her lawyers promising she will testify in her own defense.

Meagan Grunwald was 17 when her boyfriend, 27-year-old Jose Angel Garcia Juaregui, shot and killed Sgt. Cory Wride during a traffic stop on Jan. 30, 2014. Grunwald was behind the wheel of a high-speed chase that spanned two counties, led to the shooting of another deputy, a carjacking and ended with Garcia being shot by police outside Nephi.

Even though she did not shoot Wride, Grunwald is on trial for aggravated murder because Utah has no aiding and abetting laws. She was certified to face trial as an adult.

Howard described for the eight woman, two man jury the shootings of Wride and Deputy Greg Sherwood. At no point during the entire shooting and chase, did Grunwald ever try to get away from him. In fact, Howard said, Grunwald ran after him.

“She chose to aid Jose Angel Garcia,” Howard said. “At great cost to others.”

The couple was in a relationship, Howard told the jury. Grunwald had privately told friends she believed she was pregnant — but told her parents that she and Garcia were not having sex.

Zabriskie said she had been arguing with Garcia on the day of the shooting and they had pulled over on SR-73. Sgt. Wride walked up to the car and could see that Grunwald had been crying, he said, asking her: “Are you OK?”

Grunwald did not know that Garcia was wanted on a parole warrant, Zabriskie said, and asked him why he had given the officer a false name.

“You shut your f—ing mouth,” is what he claims Garcia told Grunwald, and then shot Wride.

Grunwald was forced to drive, Zabriskie told the jury. He challenged prosecution assertions that she had been a willing participant and claimed Garcia threatened to kill her, too.

“There were only two people inside that truck,” he said. “Angel Garcia — the dark angel — and Meagan.”

Zabriskie urged the jury to “put yourself in her shoes.”

“She’s caught up in a vortex of activities she had nothing to do with,” he said, asking for an acquittal on the charges.

Grunwald herself is expected to testify in her defense next week. During both prosecution and defense opening statements, she appeared to be crying and dabbing her eyes with a tissue.

Prosecutors played for the jury the police dash camera that shows the murder of Sgt. Wride. As it played, his widow, Nanette, was comforted by family members who had packed the courtroom for the opening day of the trial.  They sobbed as the rear-window on the pickup Grunwald was driving slid open and a series of shots were fired.

The pickup drove off.

When the lights in the courtroom came on after the video stopped, several jurors appeared visibly upset by what they had witnessed.

Prosecutors moved quickly through witnesses on Wednesday, including passers-by who saw Wride's initial traffic stop and deputies who found his body. Autopsy photos of Wride were shown to the jury, including the bullet wounds in his head and neck. Members of Wride's family cried as the pictures were shown. 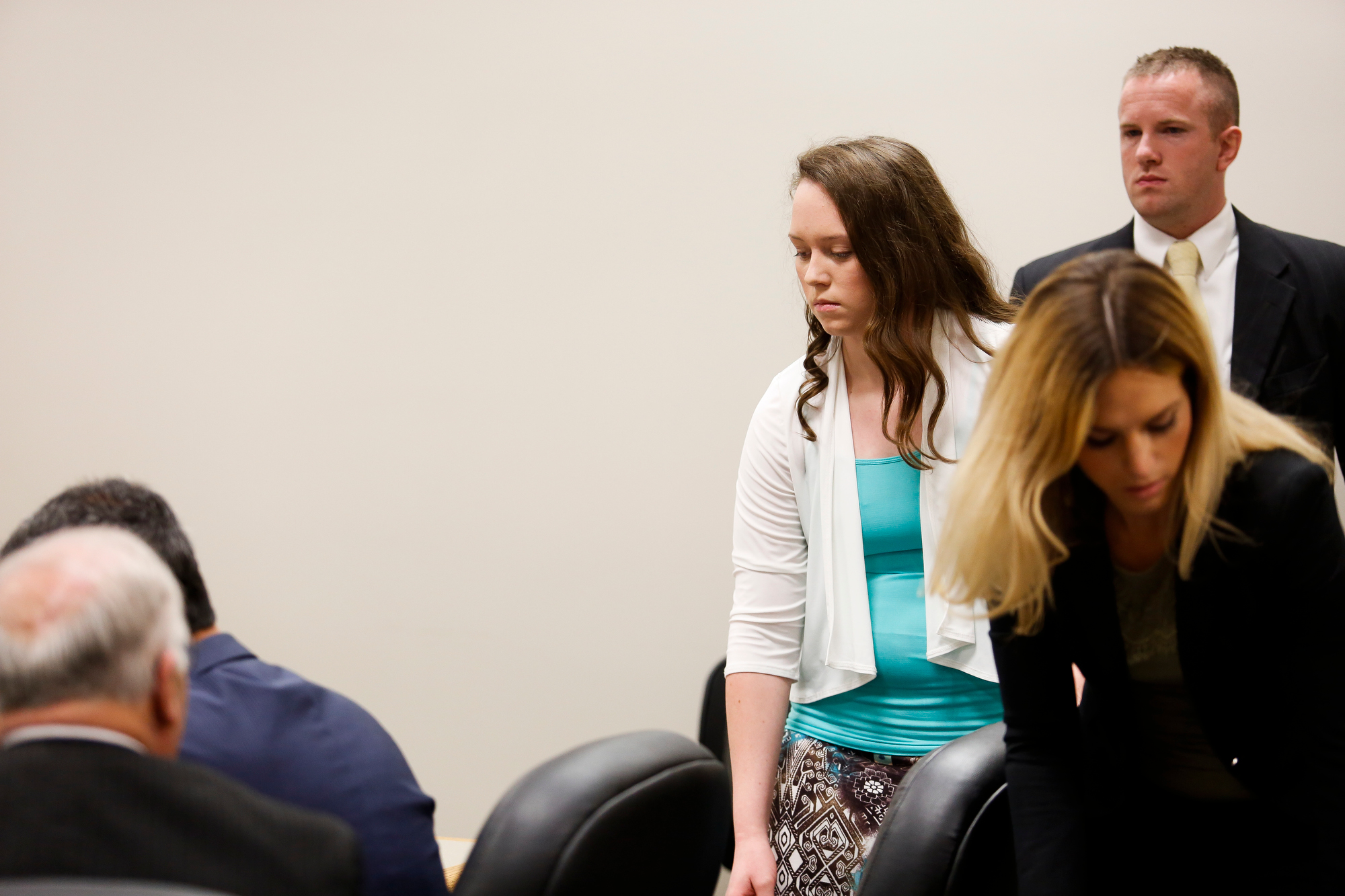