ATLANTA – Truck driver Gerald Smith glanced to his right and saw a small plane flying low and toward him as he motored along a busy Atlanta-area highway Friday morning.

Smith hit the brakes, an action he thinks saved his life. The plane’s occupants couldn’t save their own.

The single-engine Piper PA-32 passed in front of Smith’s decelerating tractor-trailer and crashed on Interstate 285 just north of Atlanta, killing all four people aboard and severely snarling post-rush-hour traffic on the bypass that encircles the city, officials said.

Four people died after a small plane crashed and erupted in flame on I-285 just north of Atlanta, Georgia on May 8, 2015. This photograph shows the plane moments after the crash.

No one on the ground was injured, DeKalb County Fire Department spokesman Capt. Eric Jackson said, even though the plane hit the highway shortly after rush hour, around 10 a.m.

“Whoever was in that plane, my heart goes out to their family,” Smith told CNN affiliate WSB. “Just a normal workday for me (is now) a day I’ll never forget, because somebody’s life was taken.”

The four on board were headed to the University of Mississippi, where 25-year-old Phillip Byrd — one of the passengers on board — was set to graduate, according to his grandfather, Graydon Gideon Byrd.

Graydon Gideon Byrd said his son Greg Byrd, 53, and his other grandson, Christopher, 27, were also on the plane.

Christopher’s finacee, Jackie Kulzer, was also on the plane, according to Graydon Gideon Byrd.

Truck driver Gerald Smith glanced to his right and saw a small plane flying at him as he motored along one of Atlanta’s busiest highway sections Friday morning.

All lanes in both directions were temporarily closed at the crash site, causing long traffic backups.

The highway has since been reopened. The only sign of damage that remains is a large black burn mark on the highway’s median.

The plane appeared to have crashed into a concrete barrier separating five eastbound and five westbound lanes, DeKalb County Police Chief Cedric Alexander said. The wreckage smoldered near the barrier in video taken of the scene.

The cause of the crash wasn’t immediately clear, National Transportation Safety Board investigator Eric Alleyne said. The NTSB will reconstruct the plane in an effort to determine what happened, he said.

Witnesses said they saw the plane flying low before hitting the highway, creating a fireball that sent a thick plume of smoke into the air.

Truck driver Gerald Smith glanced to his right and saw a small plane flying at him as he motored along one of Atlanta’s busiest highway sections Friday morning.

Smith, the truck driver, told WSB that he was driving when he looked to his right and “saw a plane approaching me at a fast rate of speed (and) flying very low.”

He slammed on his brakes. The plane clipped the front of his truck but continued past him, he said.

“It wasn’t any higher than the top of my truck,” Smith told WSB. “By the time I hit the brakes, I heard the impact on the front of my truck.”

“If I would have stayed on the gas, I probably would have hit it head on,” Smith said.

After stopping, Smith saw the plane burning near the concrete barrier.

Angela Wright captured a photo of backed up traffic on I-285 heading towards Atlanta after a plane crashed on the interstate. She was at work when she took this photo

Driving on nearby Peachtree Industrial Boulevard, Don McGee saw the plane nearly clip a red light before it reached the highway. He turned onto I-285 to see “large plume of black smoke (and) fire everywhere.”

“I ran across the field to see what was going on and see if I could help somebody, but it was gone by then, it was done,” McGee told WSB. “It was like a bomb being dropped or something.”

Siva Chamarthy also got out of his vehicle, but the intense heat stopped him in his tracks.

“I was thinking of the people inside (the plane), I couldn’t hear anything,” Chamarthy said, according to WSB. “It was so hot, I couldn’t go near them.”

The other, westbound side of the highway was affected as well, with Gabriel Hernandez telling WSB he had to switch lanes to avoid flaming debris in the lane closest to the median.

The NTSB’s Alleyne said he didn’t yet know whether the pilot told an air traffic controller anything that would have foreshadowed the crash.

Alexander, the county police chief, said it was “quite remarkable, considering the fact (this happened) on 285 around that time in the morning, that it was not any more tragic than it already is.” 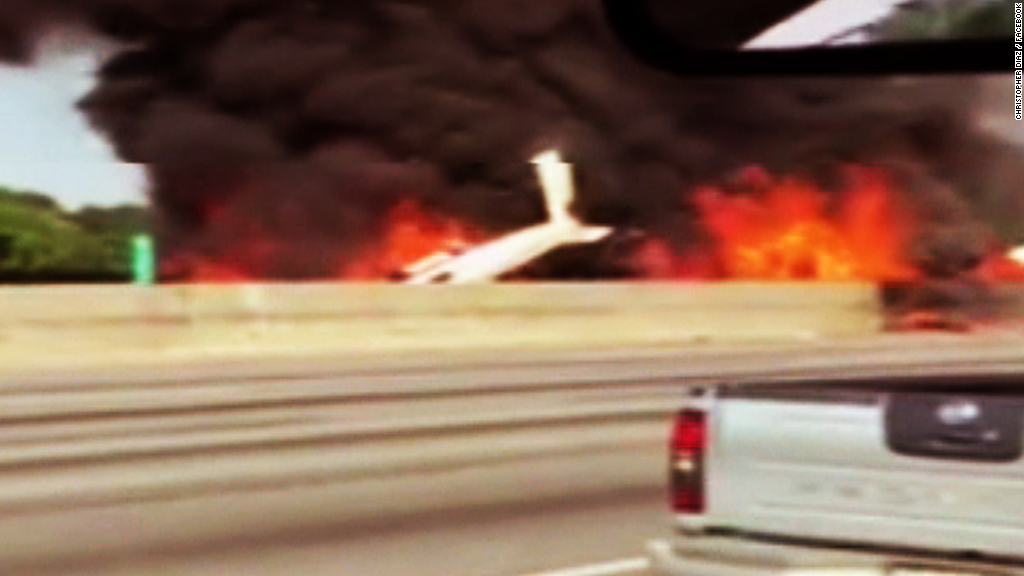