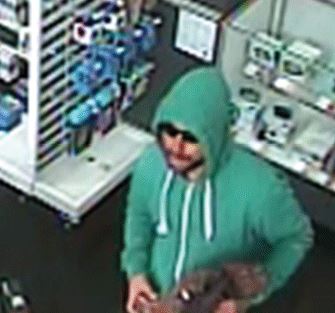 SALT LAKE CITY — Police are seeking the public’s help in identifying a suspect in a RadioShack robbery on June 5.

Salt Lake City police were called were called to the business located at 2265 S. highland Drive, after a man had robbed the store, according to release from police.

Police say the suspect brandished a weapon and demanded cash. The clerk complied. The suspect then fled the store to the west.

The suspect is described as a Caucasian man in his 20s about 5 feet 9 inches tall. He has a thin build, dark colored hair and facial hair.

The suspect is also described to have scarring or blotches on his face.

Anyone with information on the whereabouts of this suspect is asked to call Salt Lake City police at 801-799-3000.

Do you recognize this robbery suspect? Call 801.799.3000 with any info. http://t.co/oDsuOyw4eG pic.twitter.com/njfbbQbwef